Anyone can play along! Just do the following:

1. Grab your current read.
2. Open to a random page.
3. Share two (2) teaser sentences from somewhere on that page.
4. BE CAREFUL NOT TO INCLUDE SPOILERS! (Make sure that what you share doesn't give too much away. You don't want to spoil it for others.)
5. Share the title &amp; author, too, so that other TT participants can add the book to their TBR lists if they like your teasers.

"The creature with its pig nose, yellow eyes and red skin jumped up and screeched, revealing long, yellow fangs and a pink, forked tongue. 'Shut yer mouth! I can't stand the noise!'" 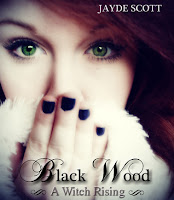 Witches, trolls, nymphs and Silverfurs are surely the figment of one’s imagination. That’s what Emily Jones used to think until she moves to Scotland shortly before her fourteenth birthday to live in her deceased grandmother’s manor. Ravencourt Manor's just as creepy as she remembers it with plenty of creaking noises, rattling doors and a hunched shadow that roams the manor’s garden at night.

In the hope to bring her separated parents back together, Emily opens a portal to Black Wood; a world of dangerous and alluring nymphs dwelling beneath the streams ready to drown her, where the sinister guardian and keeper of the Black Heart and cursed trolls are waiting, desperate to be released. And so Emily’s long and dangerous fight against the evil Muriel begins.

Will Emily learn to use her grandmother's legacy in time before the evil Muriel regains her full powers to summon and unleash her deadly servants on the world?
Posted by Cathy Keaton on Tuesday, August 09, 2011