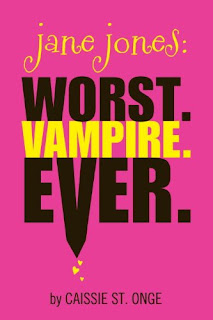 For Jane Jones, being a vampire is nothing like you read about in books. In fact, it kind of sucks. She's not beautiful, she's not rich, and she doesn't "sparkle." She's just an average, slightly nerdy girl from an ordinary suburban family (who happens to be vampires.) Jane's from the wrong side of the tracks (not to mention stuck in the world's longest awkward phase), so she doesn't fit in with the cool vampire kids at school or with the humans kids. To top it all off, she's battling an overprotective mom, a clique of high school mean girls (the kind who really do have fangs), and the most embarrassing allergy in the history of the undead, she's blood intolerant.

So no one's more surprised than Jane when for the first time in her life, things start to heat up (as much as they can for a walking corpse, anyway) with not one, but two boys. Eli's a geeky, but cute real-live boy in her history class, and Timothy is a beautiful, brooding bloodsucker, who might just hold the key to a possible "cure" for vampirism. Facing an eternity of high school pressure, fumbling first dates, or a mere lifetime together with Timothy, what's a 90-something year-old teen vampire to do?

How do I begin to write about how funny and clever this little novel was? I'm going to have to do my best. Jane Jones: Worst. Vampire. Ever. sounded like a hilarious title, and, although not a raucous knee-slapper ever other line, it was still overall witty and full of comedic, lovable characters that shaped it into a fun, fast read. I found myself enjoying this title so much, I wanted the judge at the hearing I had to attend in support of my sister to be quiet so I could concentrate on it!

This story's true strength was its characters. Jane was sarcastic in order to deal with living life as a perpetually rejected teenager with no hope of ever growing out of her eternal awkward phase. Her mother was hysterical and overprotective, and I found myself feeling sorry for Jane for being bound to her as her child, and treated like one, forever. That is not fun, especially when you've been around for 90-some-odd years, but it was easy to laugh about it here. Even her little genius, perpetually 10-year-old brother, Zachary, was adorable while still irritating her all the time.

Astrid filled the role of the high school mean girl, but in this case, she happened to be a vampire, too, and she loved to make Jane's life miserable. She came off as more hilarious than cliché, which was a nice surprise.

But, my favorite character had to be Timothy, the old calligraphy-writing vampire who looked like a 17-year-old pin-up with a “perfect pouty pout”. At first, he just talked like any other funny guy his apparent age, but when he started talking like a centuries-old vampire who lives in a castle on a nearby hill, I started rolling on the floor. That was genius comedy, and Jane's reaction to it was hilarious:

“I unfolded the second sheet [of Timothy's letter], expecting more of Timothy's calligraphy saying something along the lines of, 'Dearest Jane, I am still awaiting your answer. Please remit forthwith. Ceaselessly, Timothy.'” - from page 164

What I wasn't expecting was a great plot that had quite a fitting ending, albeit abrupt, tying up all loose ends and making Jane out to be the deserved heroine of her own story. This was such a great book to spend a day reading. I highly recommend it to those who not only love vampire lore, but the occasional story that pokes fun at it a bit, while also making fun of the types of real life people we see everyday.