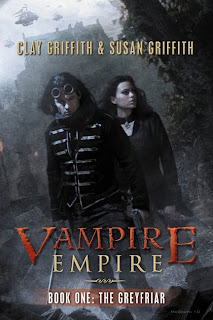 In 1870, monsters rise up and conquer the northern lands, As great cities are swallowed up by carnage and disease, landowners and other elite flee south to escape their blood-thirsty wrath. One hundred fifty years later, the great divide still exists; fangs on one side of the border, worried defenders on the other. This fragile equilibrium is threatened, then crumbles after a single young princess becomes almost hopelessly lost in the hostile territory. At first, she has only one defender: a mysterious Greyfriar who roams freely in dangerous vampire regions.

This was a story in which I was able to really come to love the characters. Despite all the political matters whirling around that made up the central plot, it still managed to be a character-driven story. Princess Adele and the Greyfriar were both given plenty of room to grow and develop into very realistic and charming characters.

I found myself being reminded of one of my favorite novel series, Trinity Blood, a Japanese light novel series in which the vampires have their own empire that goes up against the human nations. I love the set-up of that series and, although it was very different, The Greyfriar's premise was also fascinating. I won't write much about its steampunk elements, but they gave the story an old-fashioned atmosphere that was easy to envision, which was interesting given that the story was set in the year 2020.

Still, I couldn't help but have a problem with how the shifting 3rd-person POVs were handled. We'd be inside Adele's head one paragraph, and then, without warning, we'd be inside of Greyfriar's, or someone else's, in the next—all during the same scene. It was very confusing and this was a constant problem from beginning to end. Also, I didn't much care for the overuse of passive voice. I found myself rewording sentences in my head as I read them to get rid of the “to be” verb.

Despite these errors, I truly loved this story and its evolving characters, Adele and Greyfriar, as well as their relationship. Adele had to grow so much to overcome her extreme prejudices against vampires, even though they were warranted. But, her time spent with them taught her things she never knew about them, and therein, she grew in leaps and bounds. Prejudice is an ugly thing, and she was truly awful while displaying her bigotry, but when it started to crack and fade, it became a beautiful thing to witness.

The story was not particularly sensuously romantic, but the feelings were all there and I loved how it was handled. No need for groping and whispers of sweet-nothings. Adele and Greyfriar seemed to have something more substantial between the two of them, and I anxiously look forward to reading more about how they could possibly continue their sweet romance in the next volume. More, please!

P.S. The vampires in this series RULE! They can lower the density of their bodies to float in the air? How cool is that!?