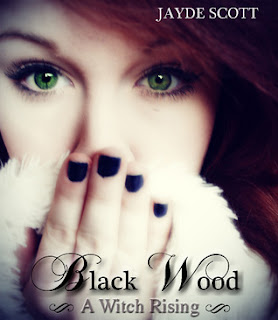 Witches, trolls, nymphs and Silverfurs are surely the figment of one’s imagination. That’s what Emily Jones used to think until she moves to Scotland shortly before her fourteenth birthday to live in her deceased grandmother’s manor. Ravencourt Manor's just as creepy as she remembers it with plenty of creaking noises, rattling doors and a hunched shadow that roams the manor’s garden at night.

In the hope to bring her separated parents back together, Emily opens a portal to Black Wood; a world of dangerous and alluring nymphs dwelling beneath the streams ready to drown her, where the sinister guardian and keeper of the Black Heart and cursed trolls are waiting, desperate to be released. And so Emily’s long and dangerous fight against the evil Muriel begins.

Will Emily learn to use her grandmother's legacy in time before the evil Muriel regains her full powers to summon and unleash her deadly servants on the world?

I'll start by saying that I really liked the characters in this short novel. Emily might not be one of the most interesting ones, but her older brother Sam was hilarious and breathed life into the story. I liked Aurelie and her nephew, Clifford, as they were eccentric and creepy to Emily until more was discovered about who they were.

I think this story functions really well as Middle Grade reading material and not as strictly Young Adult teen fiction. Parents could allow their young children to read this without fear of profanity, sexual situations, or violence. The protagonist is a thirteen-going-on-fourteen year old girl, and I think it's perfectly appropriate for a much younger audience, provided the younger child can read at the level of a thirteen-year-old.

I did, however, wish the scene where Emily trains as a witch, learning chants and spells, had been shown rather than quickly summed up in a few sentences. I would liked to have seen a bit of the process of her learning how to be a witch. And, it is a very quick read with a thin plot that comes to a quick resolution, although it ends right when another complication begins to develop. It feels like a cliffhanger, but the main plot does have a resolution and this new development serves to set up the beginning of the next volume that furthers Emily's overarching story goal.

I'm hoping the next installment is a bit more original, but, still, I liked the surprise twist at the end where Emily quickly glimpses someone unexpected of particular interest right before she leaves the world of Black Wood and returns home. I liked this story and would recommend it to people of all ages who like the Harry Potter series, as well as other children's adventure/fantasy fiction.

I received this title from the author in exchange for an honest review.