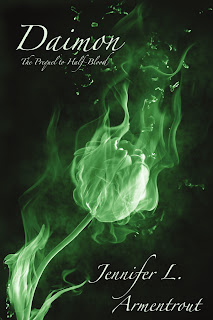 For three years, Alexandria has lived among mortals—pretending to be like them and trying to forget the duty she'd been trained to fulfill as a child of a mortal and a demigod. At seventeen, she's pretty much accepted that she's a freak by mortal standards... and that she'll never be prepared for that duty. According to her mother, that’s a good thing.

But as every descendant of the gods knows, Fate has a way of rearing her ugly head. A horrifying attack forces Alex to flee Miami and try to find her way back to the very place her mother had warned her she should never return—the Covenant. Every step that brings her closer to safety is one more step toward death… because she's being hunted by the very creatures she'd once trained to kill. The daimons have found her.

This is a short story introduction to the first novel of the series, Half-Blood (Covenant, #1). It ends leading directly into the first chapter of the first novel, so it really doesn't end, per se. But, I think it does a good job of illustrating what the series is about and what the author has to offer. I felt the writing was good and the descriptions very emotional and realistic. I felt bad for the main character Alex when she had to go on the run all by herself. She came off convincingly traumatized by her experiences.

But, I just didn't really like her much. What few characters there were, none were particularly interesting to me. Alex seemed to me too much the cliché teenage girl who had a sarcastic thought every time something happened that she wasn't happy with. I suppose that's realistic, since she is a teenager, but it's been done too many times before. There wasn't anything new in this story that I hadn't seen done before plenty of times already.

I think a lot of readers who love stories about Greek mythology and demons, or demon-like creatures that are genuinely scary and murderous could really like this series. I simply found it not the finest cup of my tea, despite the good writing.