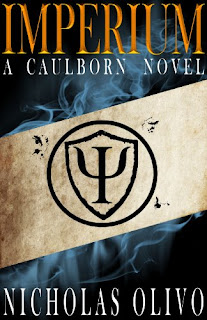 Vincent Corinthos leads a triple life. As a secret agent, he handles paranormal threats; as a god, he protects his followers from evil forces; as a stock clerk, he keeps the back room of an antique store tidy.
When one of his fellow agents goes missing, Vincent begins with the usual suspects. His investigation takes him to vampire lairs, golem laboratories, and the realm of the fae. Along the way he squares off against genetically modified gremlins, virus-spawned zombies and a horseman of the Apocalypse.

But it's only when he infiltrates a private medical lab that he realizes just how big of a threat he's facing, and even being a god might not be enough of an edge...

I received this title as a review copy from the author in exchange for an honest review.

There are a lot of impressive things going on this story. The main character, Vincent, is a half-god and he was born with a caul, so these things give him some supernatural abilities. On top of that, he is also a god to group of people who live in another dimension, and they all have supernatural abilities that he can draw upon. Through these worshipers' faith in him, he can move things with his mind, communicate with rats and birds, and spontaneously start fires.

He honestly seems overpowered to me. I have a bit of trouble believing he has so much difficulty defeating his enemies when he has so much going for him. I suppose that's better than him easily defeating any foe, since that would be boring, but it breaks the illusion when I keep thinking that any other person in his position would just use one of his many abilities to get himself out of his predicaments.

Still, it is an interesting story with a vast array of paranormal characters, mythical gods and goddesses, and a super cute tech-savvy gremlin named Gearstripper. But, I just wasn't able to really get into this story, nor most of its characters. The plot is very confusing until you get about two-thirds of the way into it—then, it starts to make sense. It does, however, come together in the end, as all the loose and mysterious threads get tied up.

But, I feel the ending is a bit weak as it literally employs a “deus ex machina”, by which I mean an actual god-character pretty much saves the day with a simple move to end everyone's trouble for the time being. I have to admit, it sucks the energy out of the story, and it takes a long time for the plot to build up.

Overall, this is a book worth taking a chance on if you love urban fantasy that stars paranormal characters and secret agents who have to patrol them.