Review: The Abandoned by Amanda Stevens 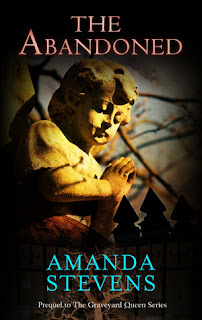 When her favorite patient at a private mental hospital passes away, psychology student Ree Hutchins mourns the elderly woman's death. But more unsettling is her growing suspicion that something unnatural is shadowing her.

Amateur ghost hunter Hayden Priest believes Ree is being haunted. Even Amelia Gray, known in Charleston as The Graveyard Queen, senses a gathering darkness. Driven by a force she doesn't understand, Ree is compelled to uncover an old secret and put abandoned souls to rest—before she is locked away forever....

I picked up this title because it was free (still is) and sounded like it had an interesting premise. It does, but I really couldn't get into this story very much. It's really more of the plot-driven variety, rather than the character-driven kind. There's nothing wrong with that at all, but it's just not my preference.

I found the writing to be decent quality except for some point-of-view problems here and there. I think it does a fabulous job with the mystery and the suspense aspects, so a reader looking for romantic suspense would probably like this story. I, personally, would have liked to have gotten more attached to the characters, but I couldn't, since they just weren't very interesting. They weren't bothersome, either, but were simply not characters I could get excited about.

This short story is a prequel to The Restorer, the first novel in the Graveyard Queen series, and is meant to illustrate what to expect from the subsequent novels. I was not intrigued enough by this prequel to want to read any further books in this series, but I think it is a good story for it's intended audience. So, if you love mystery, adult romance, and suspense with some ghosts furthering the plot (but, a story that is light on characterization), then you'll likely want to download this e-book.