Happy Halloween, everybody!
Today's review is of the recently published book on the teenage exploits of Dr. Victor Frankenstein, a name that has become synonymous with All Hallow's Eve, itself... 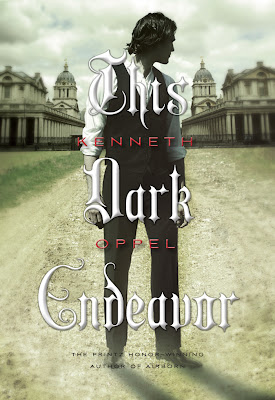 This Dark Endeavor (The Apprenticeship of Victor Frankenstein, #1)
by Kenneth Oppel

Victor and Konrad are the twin brothers Frankenstein. They are nearly inseparable. Growing up, their lives are filled with imaginary adventures...until the day their adventures turn all too real.

They stumble upon The Dark Library, and secret books of alchemy and ancient remedies are discovered. Father forbids that they ever enter the room again, but this only piques Victor's curiosity more. When Konrad falls gravely ill, Victor is not satisfied with the various doctors his parents have called in to help. He is drawn back to The Dark Library where he uncovers an ancient formula for the Elixir of Life. With their friend Elizabeth, Henry and Victor immediately set out to find assistance from a man who was once known for his alchemical works to help create the formula.

Determination and the unthinkable outcome of losing his brother spur Victor on in the quest for the three ingredients that will save Konrad's life. After scaling the highest trees in the Sturmwald, diving into the deepest lake caves, and sacrificing one’s own body part, the three fearless friends risk their lives to save another.

I love this book SO much, I can't write a deserving review. I can't quite convey all of my emotions. It is so much more than I was expecting it to be, and leads me down two distinct paths. On the one hand, it's magical, adventurous, dramatic, and romantic. And, on the other, terrifying, heart-breaking, and absolutely tragic. I feel almost gutted. It got under my skin and in my head in a way that doesn't normally happen when I read.

I haven't been moved to tears like this by a novel since I read A Tale of Two Cities by Charles Dickens. It's not quite a powerful story like that classic, but it really got to me. In many ways, I also felt the way I did when I read The Hunger Games trilogy because the characters go through such incredible trials and conflicts that I got completely sucked into the story. In This Dark Endeavor, I couldn't help but be uneasy through the most dangerous parts, as if I were right there experiencing every frightening, squeamish moment along with the characters. I cried myself to sleep the night I finished it (cat-lovers, beware).

In this prequel to the original classic tale, of which I'm already a huge fan, Victor Frankenstein is a sixteen-year-old living with his father, mother, twin brother, Konrad, and his distant cousin, Elizabeth. Just so you know, in the original, Victor had no twin brother, only younger brothers, and he had always loved Elizabeth from the time she came to live with his family.

Konrad comes down with a grave illness, and Victor decides to study forbidden magical alchemy in order to save him. In his family's Swiss chateau, he discovers a hidden Dark Library (very cool!) filled with several tomes on alchemy, which Victor develops a healthy obsession with. He secretly enlists the help of an old alchemist in town, who requires that he and his friends fetch the three ingredients to make the Elixir of Life, a potion that gives a person immortality.

He, Elizabeth, and the hilariously charming, although scardy-cat, Henry Clerval set out on some death-defying adventures in order to procure the unusual items. The adventures are exciting, like those of a Middle Grade adventure novel. Although, I wouldn't suggest this novel for younger children, as we get a lot of insight into Victor's thoughts about his growing attraction to Elizabeth—if you know what I mean.

The romantic drama is spectacular! Here is a love triangle that shouldn't annoy anyone, even those who typically hate them. Unless you hate already knowing who will likely end up with whom, and since this is a prequel, we do already know. But, this doesn't ruin a thing. Each character involved is firm about whom they love—no one waivers, and no one gives anyone the wrong idea (at least not consciously). Elizabeth is worthy of being stuck in the middle. Best of all, Victor likes to put his passion where his mouth is (pun intended), and nothing but excitement ensues.

Victor is surprisingly heroic, and he's hardly that in the original novel. He also has an inner darkness which drives him to do scandalous things. In other words, he's a 'bad boy.' This darkness is only beginning to develop inside him, and it will lead to incredible tragedy, which you can read about in Mary Shelley's novel. In his own way, he is perfectly flawed, and I love that kind of complexity. But, I'm sad, as well as ecstatic because I know what lies in Victor's future, and now that I actually sympathize with him so much, it's depressing…

This book is amazing, and even if you haven't read Frankenstein, you'll still be able to follow it. It may help to enrich your experience by reading the first few chapters of the original, but Oppel takes many liberties in changing the canon. The novel stands very well on it's own, and all the characters are wonderful. By the end, there's a hint of more to come, since Victor's hardly finished studying alchemy, and like a proper mad scientist, he remains totally obsessed. I hope I get to read more, so, so much more….

* This goes toward my 2011 Spooktacular October Paranormal Reading Challenge!
Posted by Cathy Keaton on Monday, October 31, 2011