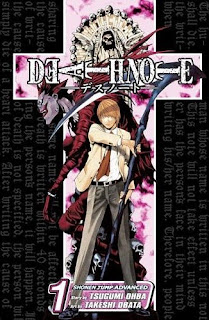 Light Yagami is an ace student with great prospects—and he's bored out of his mind. But all that changes when he finds the Death Note, a notebook dropped by a rogue Shinigami death god. Any human whose name is written in the notebook dies, and now Light has vowed to use the power of the Death Note to rid the world of evil. But when criminals begin dropping dead, the authorities send the legendary detective L to track down the killer. With L hot on his heels, will Light lose sight of his noble goal...or his life?

Death Note has to be one of the most brilliant stories ever conceived in human history. It's one of those that makes you wonder, 'why didn't I think of that?' I have already had the pleasure of reading this entire manga series, and I've seen the anime adaptation a few times—it just NEVER gets old. I'll read this manga till I'm old and gray (which is already happening!). And, yes, it is a comic book, but it could have so easily been a novel series. It is also being adapted into a Hollywood film.

This journey takes you to places you'll never expect to go. In the first volume, the story is very easy to follow, as the pieces need to be set on the board. But, once this thing gets going, it's the mental chess match of a lifetime. As for urban fantasy, you can't get much better than a magical notebook that kills the people whose names are written in it, no matter where they are in the world, and, all happening in modern Tokyo, Japan. Lots of police and detectives and criminals galore. 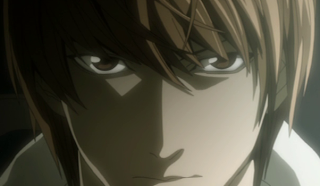 Kinda evil lookin', ain't he?
Light Yagami is a serial killer-in-the-making, and this does take a long time develop throughout the story. He really is the only human being who could run from the greatest detective in the world, L, and not get caught immediately. This story is the battle of the big minds, and it's just getting started. Still, it is riveting, to say the least, even in volume 1. L will do something to ensnare Light, who is dubbed 'Kira,' and then Light will counter with something brilliant of his own. It is cat-and-mouse, Tom and Jerry, but between two geniuses who don't drop anvils on each others heads.

The dynamic between these foes, as I already know, continues to grow in size and scope to proportions you cannot anticipate. Just know this story is a major thrill ride and you won't want to stop it anytime soon. I've already read it before and I can't put it down! It is addictive, so be sure you have easy access to the rest of the volumes because you will not be able to stop after finishing only Volume 1.

Recommended for everyone who loves psychological thrillers, mostly realistic urban fantasy, and cat-and-mouse chases. Even if you don't love any of these things, you still might like Death Note. It is THAT good.

* This goes toward my 2011 Spooktacular October Paranormal Reading Challenge!
Posted by Cathy Keaton on Thursday, October 13, 2011