"Teaser Tuesdays" is a book blogger meme hosted by
Should Be Reading.
Today, my teaser comes from my favorite Japanese light novel series, Trinity Blood... So good, I have to reread it.

"I'm almost done here, pussycat," he said over his shoulder to Jessica. "After this, I'm gonna kill ya 'til you love me."

- from Trinity Blood: Rage Against the Moons (Volume 1: From the Empire), page 40. 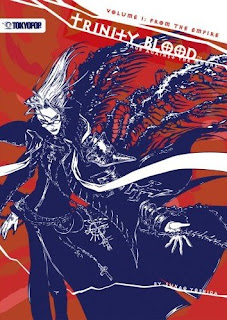 Trinity Blood: Rage Against the Moons (Volume 1: From the Empire)

Political turmoil, terrorist plots, and the relentless desire for personal revenge threaten to escalate the conflict between humans and vampires into a full-blown war. Special Ops Team AX will use every brutal weapon on hand--including a Crusnik, a vampire that preys upon other vampires--to save mankind. Packed with action, emotion, and artistry, this first volume of Rage Against the Moons contains tales of heroism, sacrifice, and retribution, as the AX agents strive to protect the innocent and keep the peace.
Posted by Cathy Keaton on Tuesday, October 04, 2011