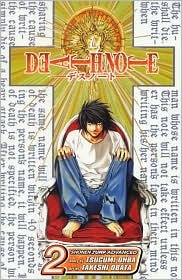 Light Yagami is an ace student with great prospects—and he's bored out of his mind. But all that changes when he finds the Death Note, a notebook dropped by a rogue Shinigami death god. Any human whose name is written in the notebook dies, and now Light has vowed to use the power of the Death Note to rid the world of evil. But when criminals begin dropping dead, the authorities send the legendary detective L to track down the killer.

Light thinks he's put an end to his troubles with the FBI—by using the Death Note to kill off the FBI agents working the case in Japan! But one of the agents has a fiancee who used to work in the Bureau, and now she's uncovered information that could lead to Light's capture. To make matters worse, L has emerged from the shadows to work directly with the task force headed by Light's father. With people pursuing him from every direction, will Light get caught in the conflux?

Because this is a serialized story, it's hard not to write some spoilers of what already happened in the previous volume. If you haven't read Volume1, I'd suggest you NOT read this review. You don't want to get spoiled if you plan on enjoying it.

Light has taken down the FBI agents with the Death Note because, at this point, he's starting to learn how to manipulate the people whose names he's written in the notebook before they die. Their actions can be controlled if he writes what they will do leading up to their deaths, so long as it's not humanly impossible. Light is so painstakingly careful about his actions, and thinks of just about every possibility in order to keep himself free of suspicion, it's like he's got OCD.

But, he encounters women's intuition in the form of Raye Penber's fiancee. Naomi Misora figures out Kira's involvement in Raye's death. She used to work for the American FBI, and had previously worked with L, so when she tells Light all this, it only makes him determined to eliminate her, since she poses his biggest threat to being caught, yet.

Meanwhile, L finally decides to show his face to the few Japanese police who are willing to risk their lives to catch Kira. L is a very socially awkward and eccentric fella, but you love him because he's so cute. Creepy for sure, but adorable, nonetheless. He's beginning to catch on to Kira killing Raye and the FBI agents, although, slower than Naomi. He decides Kira has to be one of the people Raye investigated before the bus-jacking incident, and that narrows it down to two families. One of them is Light's family.

Light, being the ridiculously perceptive kid that he is, notices right away that someone entered his bedroom while at school one day. The volume ends with him concocting a scheme to find all the surveillance cameras around his bedroom. So, we are left wondering how he's going to kill criminals in his home knowing he's being watched by the police, and not be able to do anything about it. It'll be interesting, indeed…

If you still haven't caught on to Death Note, do yourself a favor and get this manga right away. It is probably the BEST manga in existence.