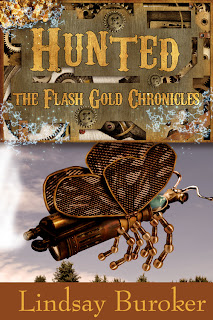 Self-taught tinkerer Kali McAlister is determined to build an airship and escape the frigid Yukon forever. Unfortunately, she’s the heir to the secrets of flash gold, an alchemical energy source that tends to make her a popular target for bandits, gangsters, and pirates.

With the help of her bounty-hunting business partner, Cedar, Kali has outwitted and eluded attackers before, and she thinks she’s prepared for anything. Then her ex-fiancé strolls into her workshop.

As if fooling her once wasn’t enough, he aims to embroil her in a fresh scheme. Meanwhile, a new nemesis is stalking her, a shrouded figure with an arsenal of deadly machines that make Kali’s inventions seem like toys. This time, it’ll take more than her ingenuity and Cedar’s combat skills to survive.

She does it again—Lindsay does some more awesome! In this sequel to “Flash Gold,” Kali and Cedar are working together and splitting their earnings 50/50, while both striving to achieve very different goals. Kali wants to get out of town in a self-made airship, which she hasn't been able to build yet, and Cedar wants to kill the man he's been tracking since the first story. But, Kali's lovely former fiance strolls into town and shakes things up a bit.

It's fun to finally meet Sebastian, the jerk that broke Kali's heart, and see how idiotic this guy is, especially when he meets Cedar. Sebastian becomes the reason the plot progresses, as Cedar wants to use him as bait to get closer to his target. Unfortunately, Kali has to go along for this journey, and that pans out poorly for her. But, another enemy is targeting Kali as they travel to Sebastian's claim, so they spend a good amount of time running for their lives.

Kali and Cedar really get to know each other better in this story, and get to explore the possibility of a budding romance. I won't say too much about that since it should be experienced by the reader. By the end, there is still much potential for them to get together. But, will either of them accomplish their individual goals? Will they have to separate someday, as a result?

“Hunted” continues the action and excitement of “Flash Gold,” and simply takes it further with the main characters and their relationship. These stories could go on forever and they'd always make some progress. I can't wait to read novella number three!

Hurry over to Smashwords.com to get "Flash Gold," the first novella in this series for FREE!