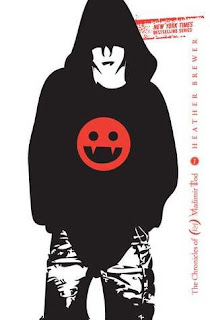 Vlad has to keep his vampire urges under control while dealing with the pressures of middle school.

For some reason, I had high expectations about this book and I assumed I'd love it. But, that really wasn't the case after reading it. (I need to stop having high expectations!) It is a well-written story, and I think perfectly targeted for its intended Middle Grade audience. It's plenty safe reading material for children, but, isn't particularly original.

I figured I'd love a story about an adolescent teen vampire who has to learn to hide his true identity from most everyone in his small hometown, but I suppose I just didn't find Vladimir as endearing as I had hoped I would. Not that there's anything bothersome about him, but there isn't much making him stand out above the crowd of male teen vamps that has him shouting, “Hey! Check ME out! I'm totally different from those other emo boys.”

For the record, Vladimir isn't “emo.” Just a very normal thirteen-year-old boy, excluding the fangs, of course. He has to deal with bullies in school and has some triumphant moments over them, using his unique vampire abilities. He has a crush on a certain girl at school, but suffers from the typical shyness and insecurities found in most human teen boys. But, he has to hide the capsules of blood in his lunch that his aunt packs for him everyday.

This is a good story—just nothing new. Vampires live amongst the unknowing humans in their world, the humans only knowing of them via cultural superstition. The vamps have their own secret organization which is something akin to a cult, and they seek to punish members of their own organization who break the rules by execution. It's intriguing stuff and a young audience unfamiliar with this trope may suck it up like a vampire dying from his thirst for blood. If that's you or some youngster you know, then you should give this series a try. It's fun for kids.