...In which I blog about a yet-to-be published novel that I'm anticipating reading... This book is about to be officially released in a few days time, so I needed to act fast! 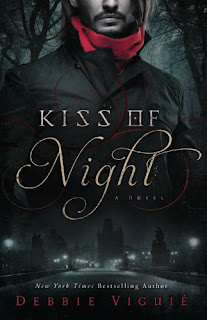 
Centuries ago, Raphael was a blasphemous knight who fought in the Crusades purely for his own mercenary benefit, and to satisfy his taste for killing. Now, condemned for his evil passions and hypocrisy, he wanders the earth a vampire, cursed with first-hand knowledge of the supernatural world he once denied existed. The powerful relic he still possesses from his days as a Crusader has been stolen by a rival vampire who has recruited an army of soulless underlings to aid him in spreading evil. At the time he learns this, Raphael has been hunting this vampire for nearly a century, and it seems the final battle is destined to take place in Prague. For help in this quest, Raphael must enlist the aid of two humans, David and Susan, who suddenly find themselves immersed in a world they never imagined, entangled with supernatural forces they can't control. Susan, in particular, finds herself conflicted as she struggles with her inexplicable attraction to Raphael. In the end, both Susan and Raphael will be called upon to exercise courage and faith, and in the process, the question, "What would happen if a vampire truly accepted God?" is answered.


Why do I want to read this? Because I've got a weird fetish with lonely centuries-old broody vampires. It's true--I love those guys for some reason. Plus, this book has a really interesting premise and sounds like it deals with vampires in the Vampire Chronicles sort of way. That's the kind of vampire fiction I like, and usually my favorite vamp fiction uses the vampire as a symbol of the human that is ineligible for God's redemption. They're not meant to be sparkly vegetarian Disney characters, after all.

This may be Christian fiction, but I'm not daunted by that, so long as it's not preachy. (I've read that it's not.) I'm Christian, anyway, but not necessarily of the author's specific faith. Still, it sounds like a read that will be up my alley.

P.S. The cover is amazing...!! Looks like the lower-half of Johnny Depp's face!
Posted by Cathy Keaton on Wednesday, October 05, 2011