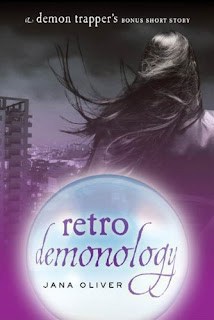 Before Riley Blackthorne can take on Grade Five demons, she has to trap her very first. Her debut solo trapping experience should be a breeze, just a harmless Grade One after all. But throw in some dippy hippies (whose peace signs and Patchouli really aren’t driving any demons away), one mischievous demon, and a run-in with the police, and Riley might not be able to pull it off...

This is another of many ebook-only prequels to a novel series meant to get you to read the first book's preview. Well, I don't mind if that's the only purpose of the story, but I'd like an interesting story that gets me … well, interested in reading further material. I think this very short story (which took up only 33 percent of my Kindle file) is actually funny, but there isn't much conflict.

Riley Blackthorne is a teenage demon trapper in a near-future Atlanta, Georgia that is aware of its demon population. She is sent to the house of a client in need of her demon trapping abilities. The demon is the most innocuous kind and really just looks like a Brownie, in faerie terms. It pees everywhere, curses, and she does something to make it sleepy, then takes off with it. Then, it wakes, gets free of its confines, and nearly causes Riley to crash her car.

The plot is rather mundane, although a couple of characters, the retro-hippie clients, were hilarious. Seriously channeling The Grateful Dead. That alone kind of saves me from giving this a lesser star rating. Still, I'm most likely going to pass on this novel series (The Demon Trappers) because I need something more intriguing to entice me to read it.

* This goes toward my 2011 Spooktacular October Paranormal Reading Challenge!