Review: "My Soul to Lose" by Rachel Vincent 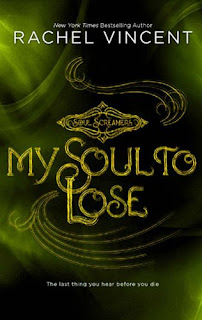 It was supposed to be a fun day, shopping at the mall with her best friend. Then the panic attack started and Kaylee Cavanaugh finds herself screaming, unable to stop. Her secret fears are exposed and it's the worst day of her life... Until she wakes up in the psychiatric unit.

She tries to convince everyone she's fine—despite the shadows she sees forming around another patient and the urge to scream which comes burbling up again and again. Everyone thinks she's crazy. Everyone except Lydia, that is. Another patient with some special abilities....

This is kind of an interesting short story. It introduces the reader to the Soul Screamers series of novels by showing the main character, Kaylee Cavanaugh, dealing with her first public screaming panic attack. She gets admitted to a mental hospital after trying to claw out her own throat because she can't stop herself from screaming.

There, she meets a patient at the hospital who knows why she had the panic attack, but that information never comes to light in this story. The new friend helps her to deal with the onslaught of another attack while there, but it only raises more questions about what's going on with Kaylee than it answers.

I will admit, it's decently written and I am curious about what's going on with Kaylee. It's plenty freaky with her supernatural ability, and a little violent (just a “little”). The characters really did not sell this story for me. I couldn't connect with them as deeply as I would have liked to. I'm sure the questions I have about them are answered in the novels that follow this short story, but I'm not sure I liked it enough to continue reading the series.

EDIT: But, I have continued to read this series, anyway!