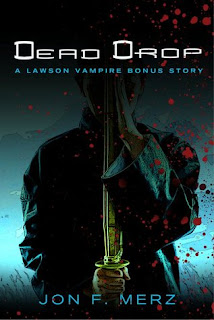 Meet Lawson. A cynical, wise-cracking vampire charged with protecting the Balance between vampires and humans, he is part cop, part spy, and part commando—a James Bond with fangs. Lawson mixes shrewd cunning with unmatched lethality to get his job done. He tries his best to dismantle conspiracies, dispatch bad guys, and live long enough to get home.

This time, Lawson has been given an easy assignment, a “dead drop.” That is until an old enemy returns…


Why have I taken so long to get into the Lawson Vampire books? This short story is completely dope-sauce!

First of all, the writing is superb—exactly what a story like this needs to be written like. This is pure urban fantasy, the kind starring an adult male protagonist, and that requires a certain writing that makes you feel like you're truly inside the head of a guy who marches to the beat of his own drummer. An outlier. But, a really cool guy that is so different from everyone else that you just wanna hang out with him because his life is so dangerous and cool. Merz makes it happen.

This is exactly the kind of urban fantasy I love to read. For me, it has to star a male character who is an agent of some sort of organization (or a mercenary guy on his own). He has to have so much swagger that he creams you with it from a mile away. Here, the swagger mostly comes from the story itself and the epic writing. From what I can tell, Lawson has swagger, but I couldn't tell so much because most of the story takes place during a flashback to the 1960's when he was younger and less confident.

That part of the story sets up what happens in the present and it's just cool, for lack of a better word. The action is so in-your-face and extreme, it reads sort of like watching The Bourne Identity movie. And, even the villain is epic and truly thinks deeply like a villain. I love me an epic villain. I'm amazed all these elements are packed into such a short story that literally takes a half hour to read from beginning to end.

Needless to say, I can't wait to read my copy of the Lawson novel that follows, The Kensei. I've finally found my dream urban fantasy novel series. I hope the TV adaptation hits the airwaves soon...