Here's another book about to get released in a couple of weeks that I'm looking forward to reading... 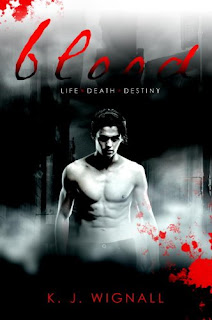 
I do not remember being bitten. I wish I did, for then I would know the creature who did this to me and I would have a purpose, to track him down and repay him for the poisoned gift he gave me...

Back in the 13th century, Will was destined to be Earl of Mercia, although he never lived to inherit his title. In the centuries that follow, Will has led a lonely life, learning to deal with whatever the present day throws at him, always searching for answers, but never finding any. Until this time, when he awakens after a 20-year slumber, hungry for the blood that sustains his undeath, when it appears that he is finally getting a glimpse at why he exists. He does indeed have a destiny, and an enemy, but revealing that fate will be a matter of trust.

I've been reading early reviews about this one, and people have been saying that it's a story that you're either going to totally love or totally deplore. I don't know what I'll think, but I'm already thinking it could be up my alley. I do love centuries-old lonely, brooding vampire guys who philosophize about their lives nearly as acutely as Hamlet!

Call me weird--that wouldn't be inaccurate, after all. But, I'm thinking this one could work for me. There will be blood... and, romance, so I've read.
Posted by Cathy Keaton on Wednesday, September 14, 2011