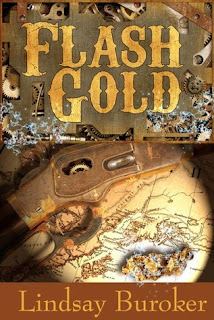 Eighteen-year-old Kali McAlister enters her steam-powered "dogless sled" in a race, intending to win the thousand-dollar prize and escape remote Moose Hollow forever. The problem? Fortune seekers and airship pirates are after her for the secret to flash gold, her late father's alchemical masterpiece.

With her modified rifle and a pocketful of home-made smoke bombs, Kali wouldn't normally hide from a confrontation, but taking on a whole airship single-handedly is a daunting task. Unfortunately, the other racers won't assist her—they're too busy scheming ways to sabotage her unorthodox sled.

When a sword-slinging stranger shows up, wanting to hire on as her protector, she's sure he has ulterior motives, but he's the only one interested in helping her. The question is...why?

This series is not exactly fantasy, as it is more true-blue “steampunk,” a sub-genre of science fiction. But, I decided to make an exception for Lindsay Buroker's Flash Gold series because I genuinely love the amazing characters, fabulous writing, and awesome story-telling. For the record, I read and review steampunk here regularly, any way (but, it usually has fantasy elements).

This short story is awesome! I completely loved it. It's a great steampunk read, as my interests in that genre are growing more and more these days. "Flash Gold" has such an endearing quality going for it, I couldn't help but love it. Although a bit light on the details of the steampunk technology, it is so strong on story and character, you just don't really miss it.

The plot is perfectly paced and there is plenty of dangerous action going on. But, the best thing about the story is its amazing characters. They are so funny and unique. Kali, the main character is my favorite and she's a little spitfire. I love how stern and independent she is at only 18-years-old (but, she is living in the 19th century, so...). Because she's kind of odd, she's easy for me to relate to. Cedar, the sexy, uber-manly, mysterious stranger that tags along with her on her race, is a great contrast to her, being one to talk less and do more. They make a great team and butt heads a lot in the most endearing way.

I couldn't help but think of True Grit as I got into this story, as Kali kind of reminds me of Mattie a little bit. I definitely want more of this story and of Kali and Cedar, since the story is left with a brand new adventure about to begin for Kali. I want to know what's going to happen next. Luckily, “Flash Gold” has a sequel titled, “Hunted,” and it's already out in ebook format. This novella easily gets five stars from me!