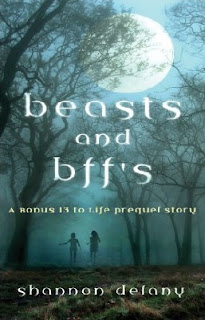 "Beasts and BFF's" (13 to Life Prequel)
by Shannon Delaney

Meet Jessie Gillmansen as she realizes that things might not be what they seem in the town of Junction.

This is a such a super short and plotless story, it is clearly designed only to get the reader to read the preview to the first 13 to Life novel. There's nothing wrong with sticking in a preview to the next installment of a story, but I expect the main story I'm reading to be an actual story. This reads like watching only the opening scene to a teen horror flick.

It goes like this: three teenage girls go for a run out in the woods. The redhead hates the blonde and the brunette is friends with both. Some scary unseen beast growls in the bushes nearby and scares them half-do-death, then takes off. Redhead's boyfriend drives up, is seen talking to the hot captain of the football team, and the girls all pile into the redhead's boyfriend's car to go watch said hot football captain practice. The. End.

What is that? That isn't a story! Thirty percent of what was in my Kindle file was the above “story” and the remaining seventy percent was the beginning preview of the first novel. This prequel did nothing to convince me to read it because it showed me how disinterested the author was in writing it. What's more, I can easily read the preview to the first 13 to Life novel on my Kindle by downloading a free sample. This short “story” gave me a tiny glimpse of some characters that I never got to care about. It was completely pointless.