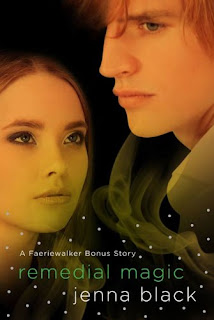 Having a prodigy for an older brother is not so fun…especially one who is magic wiz-kid. But Kimber has a plan to finally step out of his shadow.

I immediately took a liking to this short story. It's told from the POV of a fifteen-year-old girl named Kimber, who is a wise-cracking genius college student (already). She is a faerie, but is sorely lacking in the magical abilities department, so this is a source of pain and embarrassment for her. To make matters worse, her older brother of two years, named Ethan, is a phenomenally gifted faerie and attracts plenty of female admires, much to Kimber's chagrin. Well, he steals all her friends away because they are female.

So, Kimber gets this idea to have a faerie tutor come to the house while she thinks no one is home to help her develop her abilities. The tutor is a college freshmen, like herself, but she's eighteen, as most college freshman are. Somehow things go horribly wrong and Ethan shows up only to steal yet another potential friend from Kimber.

The YA voice in this story was spot-on and refreshingly hilarious. I could easily hear Kimber's voice in my head. The drawback is that it is far too short to really convey a complete story. It's more like the beginning of a good story, and maybe some of the middle, but none of the end. So, I can't give it as many stars as I'd like for that. Mostly, the preview to the first Faeriewalker book is there, right afterward, demanding to be read.

I had already purchased Glimmerglass (book 1 of Faeriewalker), before I obtained this title, but I now believe I'll enjoy it, although the protagonist is not the same person. Still, I believe in the author's writing and voice, which are both superb. Recommended for those who simply want a taste of the Faeriewalker series before committing to it.