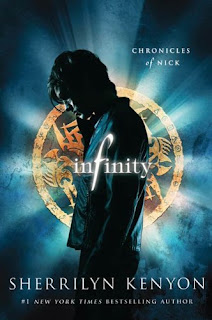 Infinity (The Chronicles of Nick, #1)
by Sherrilyn Kenyon

At fourteen, Nick Gautier thinks he knows everything about the world around him. Streetwise, tough and savvy, his quick sarcasm is the stuff of legends. . .until the night when his best friends try to kill him. Saved by a mysterious warrior who has more fighting skills than Chuck Norris, Nick is sucked into the realm of the Dark-Hunters: immortal vampire slayers who risk everything to save humanity.

Nick quickly learns that the human world is only a veil for a much larger and more dangerous one: a world where the captain of the football team is a werewolf and the girl he has a crush on goes out at night to stake the undead.

But before he can even learn the rules of this new world, his fellow students are turning into flesh eating zombies. And he's next on the menu. As if starting high school isn't hard enough. . .now Nick has to hide his new friends from his mom, his chainsaw from the principal, and keep the zombies and the demon Simi from eating his brains, all without getting grounded or suspended. How in the world is he supposed to do that?


I'm a little familiar with the world and characters of Sherrilyn Kenyon's adult novel series, Dark-Hunter. The Chronicles of Nick (starting with this novel) is a Young Adult spin-off of Dark-Hunter. I read the first volume of the manga version of the adult series, called The Dark-Hunters (review here), and that takes you about half way into the first Dark-Hunter novel. But, the main character of this spin-off, Nick Gautier, does not appear in it, so he's totally new to me.


One thing I could tell from the manga was that I liked the characters and felt they were funny, entertaining people. The same is true for Infinity. Nick is a totally hilarious 14-year-old who has a pretty crappy life, but he deals with it through the prolific use of sarcasm. Super cute kid and very heroic, even if he's not trying to be.

The other characters are wonderful, as well. In what little we see of Kyrian Hunter, I like him way more in this book than in the manga. And, my other favorite is big ol' Bubba, the gun-toting arms dealer with the kind of sass that'll warm the cockles of your cold heart. He and his littler and prettier buddy, Mark, make a great comedic team.


All-in-all, this is pretty good urban fantasy with a lot of interesting revelations throughout that are hidden from Nick until later in the story, until he gets used to the freaky paranormal stuff. Ambrose caught me completely off-guard as to his true identity. He makes a quick appearance at the beginning of the story, then disappears until the end to become a sort of 'Obiwan Kenobi' to Nick's 'Luke Skywalker.' I wish I knew HOW it was possible he could even be in Nick's life, at all!


There's no need to have read Kenyon's Dark-Hunter series in order to follow this one. In fact, it's probably more exciting not knowing who most of the characters are because it won't spoil anything for you.