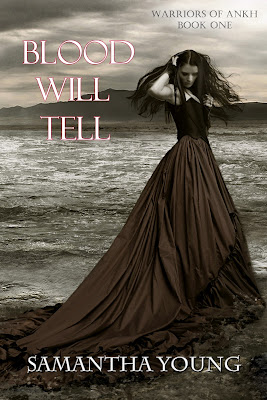 Blood Will Tell (Warriors of Ankh, #1)

Eden is a Soul Eater. While that hasn’t meant much to her in the past, she’s pretty sure any minute now she’s going to go all "Carrie" on her eleventh grade class. Noah is an Ankh. As an immortal Warrior, his purpose in life is to hunt down and kill Soul Eaters.

Eden is Noah’s next assignment. Problem is… this is an assignment with a difference. Eden’s not your average, run of the mill, Soul Eater. Noah’s job? To test Eden for possible redemption. It’s a risky business. Especially if Noah awakens Eden’s inner monster. It would be kind of hard for Eden to listen to the angel on her shoulder when the devil on the other is telling her, her new best friend is a lying, scheming, immortal enemy...

....betrayal is such a bitch. So is Eden when you get on her bad side.

I had been trying to find time to read Blood Will Tell for a while, and finally did. This one was SO fast—it was the perfect antidote for having little time to read. It only disappointed a bit, but I found a potentially new great villain character to *cross-fingers* gobble up (pun intended)...

| Buy this title from Amazon |