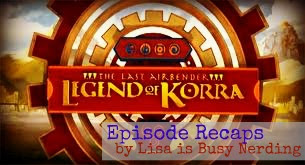 Korra airs Saturdays at 11am EST/10am CST on Nickelodeon.

Hi, everybody! Welcome to another weekly installment of The Last Airbender: Legend of Korra Episode Recaps/Commentary/Discussion/Whatever. I'm a day late, but that's okay. It's never too late to talk about Korra.

Episode 4, "The Voice in the Night"
Recap/Commentary

This show is just so amazing! GAH! It is so much better than I ever imagined it would be. It truly is meant for a more mature audience compared to the first series, Avatar: The Last Airbender

. I think that's why I'm relating to it better. I've long since graduated from Middle School, after all.

First of all, episode 4 starts out with Korra dreaming that Amon is about to take away her bending, but she awakens just before he can do it. Clearly, Amon is living rent-free in her head space. In the dream Amon even taunted her, saying she'd be nothing without her bending. She's feeling insecure because she wouldn't matter anymore if she lost her abilities. 'Tis true.

Tenzin is in a council meeting with all the other nations' representatives, and the guy representing the Northern Water Tribe, Tarrlok, is proposing that he lead a special task force designed just to track down Amon and bring him to justice. Tenzin thinks this is a bad idea. It will divide benders and non-benders even more, but the other reps all out vote him. Shady Tarrlok just got his way and I bet not for the first time (and not for the last, either).

Tarrlok mentions something interesting about older Aang that upset Tenzin. Apparently Aang had to deal with a rabble-rouser back in his day who threatened Republic City, and he dealt with him head-on. Why this got under Tenzin's skin is not clear. The dude Aang dealt with was a man named Yakon forty-two years earlier. It must mean something, but what? 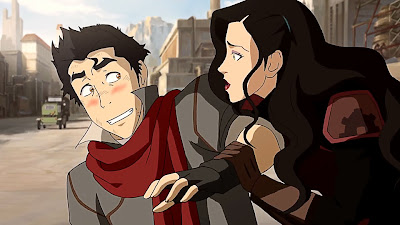 Mako gets off work and tries to catch a trolly, only to get hit by some idiot on a motorbike! He's about to lay into this guy until he realizes this guy is not a guy, at all. He's a young, beautiful, rich woman named Asami, and she is a huge fan of the Fire Ferrets. Fan girl alert, Mako! But, for once it's good to be a famous Pro-bender. Bolin is rubbing off on him. Asami sets up a date at a fancy shin-dig as an apology, and he's already in lurve.

My question: What about Korra? He all to easily forgets she exists. Son, I am disappoint. -_-

Anyway, that Tarrlok dude is shifty when he interrupts Tenzin's family dinner with Korra all of a sudden. What's he up to? He wants to recruit Korra into his anti-anti-bender task force, but she refuses him, surprisingly. She's all into her airbender training, or so she says. She's even missing out on Pro-bending practices with her boys. Tarrlok will not be turned away so easily, though.

Mako goes to Kuang's, the fancy shin-diggy restaurant that requires he have a valet dress him in duds that would pay his rent for the next three months. Chilling with Asami, he finds out she's seen ALL of his matches (stalker, much?). But, she is the daughter of Hiroshi Sato, the man who invented the Satomobile--the answer to the automobile in the Avatar universe. Is that cute, or what? So, Mako wants to meet this cool guy, fo sho.

Bolin drops by to see Korra and give her a red rose and a cupcake. My reaction: O__O. A red rose? Wow. Korra doesn't even pick up on the gesture. It means he's in love with you, girl. She's so clueless, but Bolin is adorable making up a reason to give it to her. A messenger brings by some big goodies and gifts from Tarrlok in order to sway her to join the task force, and Bolin thinks Tarrlok is a suitor! He's about to throw-down, but is relieved to hear he's not really, after all. All this flies over Korra's head.

Mako gets to meet Mr. Sato and Sato offers to sponsor the Fire Ferrets because none of them have the money to enter the tournament. They'll have to change their name to Future Industries Fire Ferrets, but so what? They get to play, and Mako is so happy, he's willing to tattoo the industry's logo on his chest. If you do, Mako, then you have to promise to let us see it.... -_o

Korra gets invited to a gala thrown by Tarrlok in her honor. What is that guy doing now? She and Tenzin dress up all spiffy and Korra gets to meet Asami hanging off the arm of Mako. "Who is she?" asks Korra. What she meant to say was, "Get away from my man, little girl, or I'll knock you into Episode 5!" Needless to say, she seems jealous, and not all that happy about the sponsorship by the girl's father. The real reason for Korra's gala becomes obvious when Tarrlok throws her in front of the press, all set up with questions about why she's so afraid to join the task force. Who's afraid? Not Korra! She'd hate to admit that, so she publicly joins it, after all. Tarrlok just got his way, again. Slick politician.

She gets to help take down a chi-blocking training session and arrest the chi-blockers, gets into the papers, but she's not happy. Something's eating at her. She knows what to do to feel better. Challenge Amon to a one-on-one duel! And, that's what she does, over the radio. At midnight on Avatar Aang Memorial Island. Mano y Korra.

Tenzin tries to talk her out of it, as does Tarrlok, but he's got an fleet of airships overhead ready to strike from the sky if need be. She waits on a statue of Aang... and waits and waits. Is he even coming? Just when he seems a no-show, she gets ambushed by Amon's chi-blockers who block her bending and tie her up in whips. Amon acts like he's going to do the deed, but he just holds up her face, telling her they will duel another day. He's got a plan and their duel is going to have to wait (until the last episode). If she loses her bending now, the benders will make a martyr out of her. 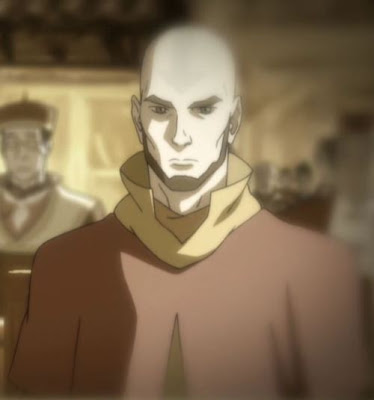 He knocks her out and she has the coolest vision ever. She sees the grown-up versions of the deceased characters, Sokka, Toph and Aang. Not only that, but she sees Aang fighting that Yakon guy who disturbed the peace of the city forty-two years earlier! It was so awesome to see these characters all grown up. Loved them all as children and teens in the first series. Yay! More, please. Funny thing is, Korra thought Tenzin was the spirit version of Aang when he finally caught up with her after Amon left. She finally lets it all out in front of Tenzin, her fears of Amon's ability and everything, overwhelmed by feels and tearbending. Yep, she can tearbend, too, just like any girl. Tenzin gives us the episode's lesson: admitting your fears is the first step to overcoming them.

Holy crud! Episode 5 is going to blow my mind! The next two episodes will be about the Pro-bending tournament and Korra gets to meet Tahno! I can't wait for that to happen.


What did you think of this episode? Are you liking it more than the original A:TLA series?

Until next time, Korraddicts, have a great week....