Okay, people. Let me explain what this is. This is a new weekly feature I will participating in along with Lisa from Lisa is Busy Nerding every Wednesday where I will be recaping and discussing the previous Saturday morning premiers of the new Nickelodeon cartoon, The Legend of Korra.

I have been a HUGE fan of the Avatar: The Last Airbender cartoon series for the past five years because it is so unique, refreshing, and like nothing else out there. What an amazing show! And, it really isn't just for kids. It's one of those kids' cartoons that can honestly be enjoyed by people of all ages. No, I don't have any kids that got me into the show. I seriously just channel-surfed one day and found it all on my own. I am that awesome (read: weird).

So, today I will be discussing Episodes 1 & 2 (they premiered together on Saturday, April 14th), and this will be the usual routine. Go HERE to watch the first 2 episodes online for free! You will be most impressed by the beautiful fantasy elements and incredible world-building. I hope you will join me in watching and discussing this amazing new series!


Korra is the next Avatar after Aang, living in a world united by his legacy, but it has fallen into a bit of chaos since his death seventeen years ago. She was born into the Southern Water Tribe, and we see right away from Episode 1 that everyone knew she was the world's next Avatar because she could already bend all the elements except air from a very young age. She comes out guns-a-blazing from the womb! This girl is p-o-w-e-r-f-u-l and she knows it. She makes sure everybody else knows it, too.

Her issue is that she needs to learn how to airbend, and the only person on the planet who can teach her is Aang's son, Tenzin, who is carrying on his airbender teachings. One thing that the creators of the show are doing perfectly for this sequel series is bringing back some old familiar characters. We actually get to see old lady Katara who has become the medicine woman for her Southern Water Tribe, and she knows through spiritual divination that Korra must leave her home and find her own path as the world's Avatar.

This doesn't sit well with Tenzin because he knows how to teach airbending, but Korra is just not having it. She thinks like an earthbender, all "shoot-em up and crush em into dust" type of mentality, which is the opposite of the Air Nomads' way. She decides to chill in Republic City, which has an anti-bending movement on the rise because non-benders feel oppressed by benders due to the natural selective process of whatever it is that endows one with bending abilities. Yeah, it is kind of unfair when you're not born with these abilities (but, life is unfair. As Korra says, you gotta deal with it!).

She doesn't have to worry much about this movement in the first two episodes just yet, and instead, opts to check out a pro-bending tournament. In this series, bending is a professional sport and there's a whole new way to bend all the elements unlike anything Korra has ever seen before. She totally digs it! It's modern and the bee's knees (this expression will make sense in a moment, I promise).

She meets a guy around her age named Bolin and his brother Mako, both of whom are on the Fire Ferrets, a pro-bending team. Mako is like the Babe Ruth of pro-bending, but he's a bit unfriendly and unsociable, unlike his outgoing brother, Bolin. Korra gets a chance to play in one of their matches when their third team member flakes out on them at the last minute. She doesn't know what she's doing, but she's found her place in the world, as pro-bending is the freakin' berries and totally copacetic.

Why am I using all this 1920's American slang? Well, that's what decade it is in the Avatar world, and you can see the style reflected in all their technology, clothing and way of life. Call it 'steampunk lite.' You'll even see some airships floating around. Despite this, I still see mostly familiar attire and martial arts from the original series, so this makes me happy. I'm still watching a show that reflects its predecessor very well. 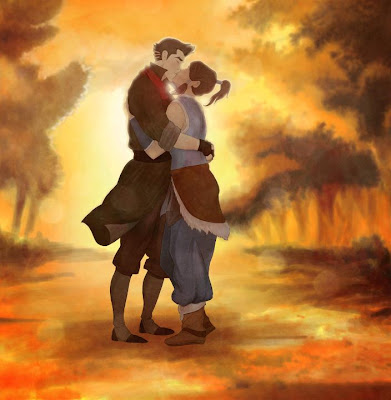 Now, I can't help musing on what I want to see in future episodes. Korra x Mako!! Of course these two seem to be getting shipped together already. If you consider that Korra is a Southern Water Tribe girl (like how Katara was), and that Mako is a Fire Nation guy (like how Zuko was), then it's like Zuko x Katara (Zutara) gets to happen now! I always liked Katara and Zuko together, even though they never got romantically involved. I actually still hold out hope that they will get together in this series because Zuko could still be alive, for all I know at this time.


Needless to say, I'm super excited about this season and about seeing what's in store for Korra and her new friends. Who else is still alive from Avatar: The Last Airbender? Who is this masked villain character that hates element bending? Who was that pretty boy Korra was mocking to his face in that preview I saw? Seriously, this looks like it's going to kill it, and I can't wait to see every minute of this show!


If you're following the show, what did you think of Episodes 1 and 2? Do you like this new, very different type of Avatar hero?