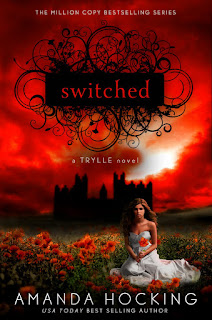 When Wendy Everly was six-years-old, her mother was convinced she was a monster and tried to kill her. It isn't until eleven years later that Wendy discovers her mother might have been right. With the help of Finn Holmes, Wendy finds herself in a world she never knew existed—a world both beautiful and frightening, and Wendy's not sure she wants to be a part of it.

I read this novel about a year ago and I'm happy to see it venturing into traditional publishing, although this book was already going gangbusters while being self-published! Even though I already reviewed it way back when my blog was brand new, I decided to rewrite my review and publish the new version for the novel's re-release date set for tomorrow.

I really like this story and its interesting characters. Amanda Hocking gives Wendy, the main character, a really snarky, sarcastic attitude, which I adored right away. Hocking writes so well in the YA voice and it shows. I think this comes naturally for some people, and she's one of them. As for the story, she does a great job making me constantly ask questions, which get answered in sprinkles throughout the book. No info-dumping here because it's done right.

Wendy is kind of an irresponsible teenager, but very likable. Without her I-feel-out-of-place attitude, the story would lose one of its most important themes, which I'll touch on later. And, although I like Finn, her love-interest, I am not bowled over by him, but, he's a good guy. Still, so many awesome characters are in this book, like Matt (Wendy's brother), Rhys and Tove, just to name my top three faves. I can't tell you how much I fell in love with Rhys! He is the cutest teenage boy ever. The charming characters really sold me on this series.

But, what I think really makes this story stand out above the crowd is the unusual premise based on the concept of beautiful trolls. Trolls? Yes, trolls—those mythical creatures that live under bridges. Well, these trolls do not live under any bridges, but they are based on real troll mythology, as there are some cultures in the world that have attractive, human-like trolls. This is what inspired Hocking's world-building of her trolls and their very unique social structure.

The back-story on the trolls is fascinating. The novel reveals how the Trylle society—what the trolls call themselves—functions, and why they depend so much on their changeling babies. It's such a smart idea, even if a tad unethical. When a human baby from a wealthy family is about to be born, the Trylle use their Persuasion abilities, supernatural mind-alteration, to switch the human baby for a Trylle baby, usually of the same sex. That Trylle baby is then raised with the rich humans until age eighteen, then they are tracked and returned to Trylle society where the Trylle grift money from the rich humans who raised the Trylle child. Wow. Just a bit immoral, but still so interesting.

When it comes to the romance, there is some, but the plot doesn't revolve around it, which I think is good. It's set-up very much like a lot of YA paranormal where it plays a large roll, but the story is really a coming-of-age novel about Wendy discovering who she is and where she fits into the world. As for the ending, it feels rushed, and I would have liked the last scene fleshed out more. It's so emotional, yet glossed over too quickly. But, Switched is a great piece of story-telling, and I'm eager to read and review the rest of the books in the trilogy.