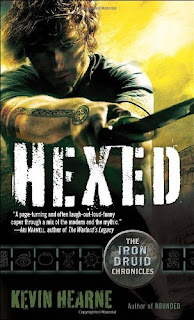 Atticus O’Sullivan, last of the Druids, doesn’t care much for witches. Still, he’s about to make nice with the local coven by signing a mutually beneficial nonaggression treaty—when suddenly the witch population in modern-day Tempe, Arizona, quadruples overnight. And the new girls are not just bad, they’re badasses with a dark history on the German side of World War II.

With a fallen angel feasting on local high school students, a horde of Bacchants blowing in from Vegas with their special brand of deadly decadence, and a dangerously sexy Celtic goddess of fire vying for his attention, Atticus is having trouble scheduling the witch hunt. But aided by his magical sword, his neighbor’s rocket-propelled grenade launcher, and his vampire attorney, Atticus is ready to sweep the town and show the witchy women they picked the wrong Druid to hex.
My Review

Okay, I'm pretty sure I cracked a rib laughing through this one, since I can feel the pain in my right side. This book went to epic levels of hilarity, and I could not—NOT put it down. That, for me, is saying a lot, because I usually have no trouble putting a book down and doing other stuff. But, not with Hexed. Atticus put a binding spell on my copy, so when I started to read it, I could only get about 10 feet from it before I found myself right back at the bookshelf I keep it on. It was the weirdest thing ever!


I say this only because I am completely convinced that Atticus is real, and so are all the other amazing characters in this series. Kevin Hearne does a brilliant job of giving each of his important characters detailed little nuances that all real people have—for example, Atticus loves omelets for breakfast and whole wheat toast with orange marmalade. Oberon loves steak (of course, what dog doesn't?). It's things like this that make me believe that they both actually live in the Tempe, Arizona area and that if only I'd drive over there, I might find Atticus' house, and run into his super hot vampire attorney, the famous Leif Helgarson!

Uh, oh... Here comes a long spiel (or squeal?) on how much I love the vampire Leif Helgarson, the famous vampire who isn't famous—or, at least everybody in the book seems to know who he is, yet Atticus can't figure out why, since the man himself claims he is not famous. He is the reason my rib is busted because he's just so ridiculously hilarious, I couldn't not laugh hard enough to crack it. I found myself obsessively reading this book because I just wanted to find out more about Leif… 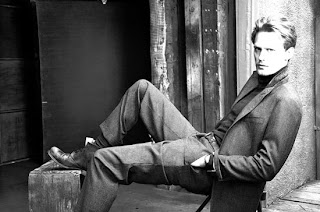 Here is he is in a nutshell: Imagine an English butler trying to talk like any typical college frat boy. Now, make sure he's pronouncing everything the way an English butler would, very stuffy-sounding and proper, but using all those hip and cool phrases, like “I'm chill, how 'bout you?” or “Throw down!” when he wants to start a fight. But, of course, he's not even using the correct slang, and saying these phrases more like, “I am cold,” or “Throw up!” Now, you have the most epic vampire in fictional existence trying to be cool, and that fella's name is Leif Helgarson. Leif is the raddest, baddest vampire dude ever, and he makes Dracula look like the mosquito of undead bloodsuckers. (He hates Dracula, by the way.)

If you're a nerd like me, and you want to read a fun and funny book filled with forever quotable quotes and quips, then look no further, folks. <— (This sentence has two sets of literary alliteration—go me!) This book is for y'all. If you want to read about crazy, wacky characters and all their antics, and how all the gods and goddesses in every mythology from world history are able to converge together in the same 10-mile radius, and, well, not get along with each other (as you would imagine they would not), then read the Iron Druid Chronicles. I just barely squeezed in reading these before the year ended, but they are already my favorite reads of the entire year of 2011. Mr. Hearne cannot write these books fast enough!

P.S. That is Alexander Skarsgaard from the True Blood TV series, as an FYI.
Posted by Cathy Keaton on Wednesday, January 11, 2012