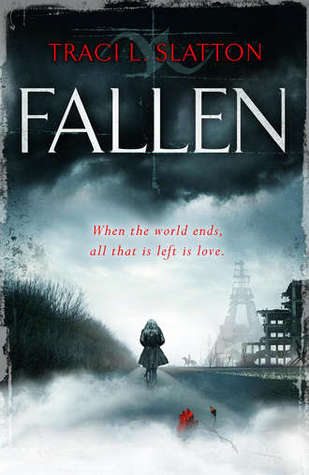 As chaos descends on a crippled Earth, survivors are tormented by strange psychic gifts. In this time of apocalyptic despair, love is put to the test. One woman with mysterious healing power guides seven children to safety. Charismatic Arthur offers her a haven. Slowly Emma falls for him. But at the moment of their sweetest love, his devastating secret is revealed, and they are lost to each other. Will Emma stay with him?
The first in a romantic trilogy set during the end times.
My Review

Here's an adult romance title that suffers from having a really good story to tell, but it is ruined by its intolerable main characters. And, it doesn't take long to see just how awful they really are, as you need only read into the book a few pages to see the main character, Emma, offering to prostitute herself to a man she barely meets in order to live in his camp with eight needy kids-in-tow. No, she is not already a prostitute, so, yes, this is very random and unnecessary behavior on her part. What's worse is that Arthur, the great “hero” in this story, decides to take her for a test drive before even asking for her name. What a love story this will be, right? <rolls eyes>

No, this isn't erotica, although with this type of set-up at the beginning, you'd think that's exactly what you were getting. Add up all the stupid things these two main characters do, who are supposedly in love with each other, and you get a book that makes me want to recycle it so it can be reborn into something better one day.

This review gets a wee bit SPOILERY, just so you know...

Emma leads Arthur on, even after he's clearly fallen in love with her, but she's still married to her husband from before the Apocalypse. I can't really sympathize with such an overt adulteress. Arthur rapes Emma in one scene, and is very controlling of Emma and won't let her do anything without his permission first. Controlling, much? When Arthur finally finds out about Emma still being married, he demands she divorce her husband. She wants to officially break it off with her husband, and Arthur agrees so long as she does it over the radio. But, she wants to see him in person, which could take ten years. Unreasonable much? I'm feeling the love, I really am.

These two characters are in their thirties, yet have the combined emotional maturity of one twelve-year-old. This is rather sad, and extra sad when you consider that this story has so much potential. It's actually a really good story with an interesting plot development and concept. There is this mysterious mist that has gone around all over the planet and it kills everything made of metal properties, including people (because people have metal in them, too). It's well-thought out and has great world-building. But, I hate these two characters so much, I could care less about them and their experiences.