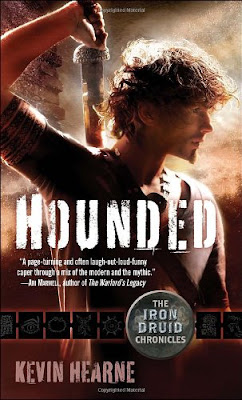 Atticus O’Sullivan, last of the Druids, lives peacefully in Arizona, running an occult bookshop and shape-shifting in his spare time to hunt with his Irish wolfhound. His neighbors and customers think that this handsome, tattooed Irish dude is about twenty-one years old—when in actuality, he’s twenty-one centuries old. Not to mention: He draws his power from the earth, possesses a sharp wit, and wields an even sharper magical sword known as Fragarach, the Answerer.

Unfortunately, a very angry Celtic god wants that sword, and he’s hounded Atticus for centuries. Now the determined deity has tracked him down, and Atticus will need all his power—plus the help of a seductive goddess of death, his vampire and werewolf team of attorneys, a sexy bartender possessed by a Hindu witch, and some good old-fashioned luck of the Irish—to kick some Celtic arse and deliver himself from evil.

Can I just say that this is pretty much exactly the type of urban fantasy I prefer to read? I will, anyway. I LOVE this! It hits the nail on the head in terms of the characters, the plot, the humor, the fantasy aspect, and the urban-ness of it all. It is perfection...

Atticus is that type of male protagonist that I usually fall very hard for, so I'm already a dead fish in a barrel for him. Or, to put it in Oberon's terms, Atticus' dog, I'm a juicy steak that landed on the floor right at his paws. I'm easily bowled over by these sarcastic, sexy heroes of urban fantasy. They are cool and relaxed, but will kick major bootay when necessary. They usually are not normal human beings, and for Atticus, that means he is an 2,100-year-old Druid who has a pretty clever way of staying perpetually twenty-one (give me some of that stuff!).

The entire story is told through Atticus' point-of-view, so we get a huge dose of his wit and wisdom, which comes in spades. He's always ready with a clever quip, and a remarkable way of humiliating the over-confident characters who think they're uber smart. But, he's not even close to being the only amazing character in this novel because it is chock-full of crazy, amazing characters.

Atticus owns probably literature's finest, funniest, most adorable pooch in Oberon, his Irish wolfhound. He has been able to establish a telepathic link with him, and over time, Oberon picked up on how to understand and think in English, thus allowing them to communicate with each other. These lines are some of the best and most hilarious parts of the story. How about the part where Atticus is yakking about something that has to do with ancient Druids, and Oberon very kindly admits, <I have no idea what you're talking about.> Nevermind, says Atticus in response.

One of Atticus' biggest problems is with the local witch coven, as their kind have proven to him many centuries earlier that witches can never be trusted. As one witch happened to forget that the SPCA stands for preventing the cruelty towards animals, mistaking it for a society dedicated to the cruelty of animals, Atticus says to Oberon, “See? Witches.” <I see what you mean now,> thinks Oberon, <She'd probably give me a sausage and it would have broccoli in it.>

Atticus finds he has to deal with all sorts of unwanted trouble because his old enemy, a faerie by the name of Anghus Og, the Celtic god of love, wants the sword Fragarach, which is one of the most powerful swords in the world. Addy spends the whole of the novel being chased by, and fighting off, the local police, other inhumane faeries, Fir Bolgs, which are these mean giants, and some seriously witchy witches all within his miles of his home. One of Hounded's many strengths is how it blends mundane reality with the paranormal in a very realistic way.

Thank goodness he has the raddest lawyers ever to help him out in more ways than to simply comprehend the fine print: not only are they tough-as-nails with the cops, keeping them in line, but his day attorney is a werewolf and his night attorney is a vampire (a hot Icelandic guy with white hair who speaks in iambic pentameter), so they can kick butt, too. Epic, and they do their heroic thing in only the way awesome lawyers can—Larry H. Parker's got nothing on these guys.

There's really no romance, but that doesn't mean Addy has no romantic interest in anyone. He's a guy, essentially a human guy at that, so we find out what goes through his mind every time an attractive female shows up. But, he's partial to the pretty red-headed barmaid named Granuaile, and they form a certain interesting alliance with each other. It's just the perfect sort of alliance for them that allows for a possible future romance, although does not guarantee it (but, how could it not?), thus making me want to see if it'll ever happen in future novels.

I think if you want to read something hilarious, super fun, and has plenty of action, then this is the perfect book for you (it certainly is for me!). I've already started reading the next installment, as I cannot even hope to put my mind to anything else. I'm completely addicted! It is one of the best books I read all last year.