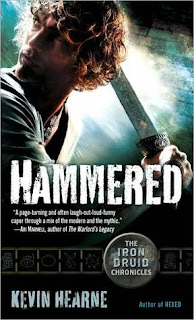 Thor, the Norse god of thunder, is worse than a blowhard and a bully—he’s ruined countless lives and killed scores of innocents. After centuries, Viking vampire Leif Helgarson is ready to get his vengeance, and he’s asked his friend Atticus O’Sullivan, the last of the Druids, to help take down this Norse nightmare.

One survival strategy has worked for Atticus for more than two thousand years: stay away from the guy with the lightning bolts. But things are heating up in Atticus’s home base of Tempe, Arizona. There’s a vampire turf war brewing, and Russian demon hunters who call themselves the Hammers of God are running rampant. Despite multiple warnings and portents of dire consequences, Atticus and Leif journey to the Norse plain of Asgard, where they team up with a werewolf, a sorcerer, and an army of frost giants for an epic showdown against vicious Valkyries, angry gods, and the hammer-wielding Thunder Thug himself...
My Review


Ugh! Death by ravaging cliffhanger! After that one, I'm smarting a bit. I usually find it easy to wait for the next anticipated book in a series, even if it's a year before it will come out. But, this time I'm wasted at the intense presence of this cliffhanger. Beware the cliffhanger of DOOM...


Now, on to my actual review of this book. This installment is so fan-freaking-tastic that I don't feel like I can assemble the right words together. I'm also severely tired, as I have only just finished reading it, and it's 1:30 in the morning (this was written 1 ½ weeks ago). Atticus is gearing up to help pick a fight with a certain thunder god—Tall, Blond and Lightning himself. Yeah, we really get a good idea of what Thor, the Norse god of thunder and lightning, is really like, and it is not good. He has wronged far too many people and he needs to be taken down.


If you'll recall in Book 2, or not if you haven't read it yet, Atticus agreed to join his fabulously handsome and old-fashionedly quirky lawyer that I'm in love with, Leif Helgarson, on a mission to take revenge on Thor, who more rightly ought to be regarded as the god of douchebags. Leif has assembled a team of immortal dudes who are all sporting murderous rage against that lightning/hammer guy, too. I love how through the tales each of them tell each other around a campfire—good ol' male bonding—we learn their origin stories, not just how they were wronged by Thor and how awful he is.


My favorite character has been Leif since book 2, and we really get a vivid picture of who he is, how he became a vampire, and how old he is (very old), amongst other juicy tidbits. Leif fans will adore this one, although may find the ending to be a bit hard to swallow. But, I'm super happy with all the background info on him, and his strengthening friendship with Atticus. It's beautiful, man!


Anyway, again, I laughed so hard I nearly pooped a cow (I won't say this expression the Irish way because I am not in anyway Irish, and that would make me look foolish. Although, I've probably already managed that just now). I didn't hurt myself this time, at least, but Atticus reached new levels of funneh, and his questions to Leif about the secrets of vampirehood were just so friggin' hilarious, it made the whole book worth reading right there!


But, seriously, this book does everything—makes you laugh out loud (lolcat style), makes you cry (especially at Gunnar's and Leif's tales, if not at them directly when they battle the gods), and makes you gasp in horror at the Star Wars Force-infused cliffhanger that threatens to choke you like Darth Vader's death grip. You will fall in love with this series if you haven't already, and if you're already there, you will fall that much more in love with it. It's the best one, so far. With all this in mind, you have been warned....