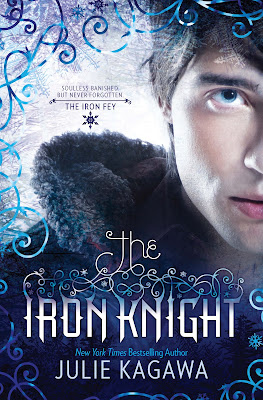 To cold faery prince Ash, love was a weakness for mortals and fools. His own love had died a horrible death, killing gentler feelings the Winter Prince might have had. Or so he thought.

Then Meghan Chase—a half-human, half-fey slip of a girl—smashed through his barricades, binding him to her irrevocably with his oath to be her knight. And when all of Faery nearly fell to the Iron fey, she severed their bond to save his life. Meghan is now the Iron Queen, ruler of a realm where no Winter or Summer faery can survive,

With the unwelcome company of his archrival, Summer Court prankster Puck, and the infuriating cait sith Grimalkin, Ash begins a journey he is bound to see through its end—a quest to find a way to honor his vow to stand by Meghan's side.

To survive the Iron Realm, Ash must have a soul and a mortal body. But the tests he must face to earn these things are impossible. And along the way, Ash learns something that changes everything. A truth that challenges his darkest beliefs and shows him that, sometimes, it takes more than courage to make the ultimate sacrifice.

It's over. The Iron Fey series is all over. That's what comes to mind as I write this review. I didn't expect to feel so much loss over that simple fact, but as soon as I closed my copy of the book, that's what I felt. I had been looking forward to reading the fourth and final installment in the Iron Fey novel series for several months, and now that I've read it, I know I'll be missing that feeling of anticipating the next exciting adventure.

But, the story comes to its inevitable conclusion as we say farewell to the characters that got us started on this wild journey into the land of Faery. I barely want to write much of anything about this particular installment, so much as I want to write about how I feel about the entire series. I'll weave the two together as best I can for my review.

Ash starts out needing to find a way to earn a soul so that he is able to fulfill his vow of returning to Meghan Chase's side. Fulfilling obligations is serious business for the Fey, and in this book we find out why. If Ash doesn't try to do this, he will become an evil thing, and seek to destroy all of Faery, including his beloved Meghan. So, this is mostly what drives him.

Despite his cold disposition, I warmed up to Ash pretty quickly when I first started the series because I liked how he was obviously attracted to Meghan, despite himself. When alone with her, he could be very kind and concerned for her well-being. In The Iron Daughter, we got to see this easily, and I loved Ash all through The Iron Queen, too. His devotion to Meghan hardly has equal, and that comes to fruition as he gets a chance to prove it in The Iron Knight. And, what he must go through to prove it is painful, bitter, yet ultimately full of joy, just like human life itself.

When I read “Summer's Crossing,” I fell totally in love with Puck, unexpectedly. Why I hadn't earlier is beyond me, but he really is one of the funniest YA heroes in all of YA literature. And, this journey needed to include Puck, if for no other reason than because without Puck, there really is no Ash. They are the oldest of friends, and you learn from reading the right kind of teen literature that your friends are part of your heart—you need to rely on them, as they need to rely on you. I cried as Ash and Puck finally parted ways in that unforgettable scene.

This story has such an ethereal, dreamlike quality through most of the journey, so it feels like being inside a strange dream Ash is having. Or, maybe that is how he normally experiences life as a faery. It is so rich with detail and beautifully designed scenes that stick in your head long after you finish reading them. I could visualize everything in my head so well, which is either like watching a movie, or just simply being there on Ash's shoulder the entire time, like he's lending you a space to sit on him and observe.

We really get to know Ash, discovering that he and the Fey have no conscience, and we find out what that really means. We get to see flashbacks to when Ash was a soulless fey who never had a genuine mean bone in his body, but was willing to behave terribly when goaded into it, or forced to. And, he never felt any remorse. The Fey are sort of remarkable that way, and it explains their often cruel and unfeeling behavior towards humans and each other. I even pity the fey, having learned how terrified they are of being forgotten by the very beings that created them—the humans, for being forgotten by them means extinction.

I think this installment is the perfect way to wrap up the series because it addresses so many questions, even questions I didn't think I had. You know you're holding the work of a great storyteller when she clarifies the confusing, often mysterious aspects of her world-building, whether you asked for it, or not. You realize it deepens your understanding of all the previous books, making them not just mere stories with beginnings, middles, and ends—but real places you can journey to anytime you feel like it.

I'd say goodbye, but that sounds so final, since Julie Kagawa plans to continue more of her world of the Iron Fey in a future series starring Ethan Chase, Meghan's little brother. So, we can reasonably assume our favorite first-series characters will make cameo appearances. Besides, the Fey are always out there somewhere, lurking behind a bush, or a tree, so long as we remember them. And, as long as you keep using the internet with your iron-derived technology, the Iron Fey will assuredly prosper, too. Until I see all you faeries again, I'll be the voice of reason (a.k.a. Grimalkin) and say, do try to stay out of trouble….

For a possible resource for saving on books, try using promotional codes.