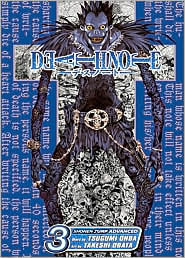 Light is chafing under L's extreme surveillance, but even 64 microphones and cameras hidden in his room aren't enough to stop Light. He steps up the game, but before the battle of wits can really begin, a family emergency distracts him. But even though Light isn't using the Death Note right now, someone else is! Who's the new 'Kira' in town?

This review contains spoilers for the first two volumes of Death Note, plus the third one, of which I'm reviewing here. Don't read this review unless you want to know what happens before you read it.

This is the best volume so far! If Death Note had been moving along at a sort of slow pace up until now, that's all changed. So many exciting things happened, I was laughing my head off in some parts and freaking out during others. It goes to show you that it really is a high drama—very much a thriller.

It starts off with Light having Ryuuk, his shinigami death god, search for all the hidden cameras in his bedroom, so that he'll be able to feed him apples. That's Ryuuk's addiction, like humans and tobacco. Once all sixty-four cameras (OMG!) are discovered, Light configures how he'll sit at his desk, so as to block the view of the camera while he watches a mini TV hidden in a bag of chips. This way, he looks like he's just snacking while doing his homework, but he's really seeing criminals' names and faces, and writing them in the Notebook.

But, seeing this supposed normalcy really doesn't help L feel better about Light not being Kira. Then, Light enters college, and L is at the commencement ceremony, giving a speech right along with him. L looks so adorably creepy, with his huge bug eyes and the way he won't blink, nor look away from Light. How he manages to be cute and creepy I'll never know. But, L decides to tell Light that he is L. Totally shocked, Light doesn't know what to believe, thinking the real L would never reveal himself to anyone. But, it ties Light's hands behind his back, so that if L were to die suddenly after meeting Light, Light would be under immediate suspicion. Well played, L.

Then, they have a heated tennis match so L can get an idea of just how competitive Light really is. It's pretty intense, and afterward, L gives Light a series of questions meant to trap Light, and they very nearly work. L wants Light to work with his team on the investigation of Kira because, if Light is Kira, then he won't be able to make any moves on the police task force without giving himself away.

Suddenly, it looks as though Light is taking some seriously reckless measures by having Kira hold an entire TV news station hostage with video tapes meant to be broadcast to everyone in the region. Here, Kira proclaims he will create a new utopia where all evil people will be killed, or frightened into submission, and he wants the police to cooperate with him. Only thing is, L does not believe that these are the actions of Kira, but rather a stupider imposter Kira who can kill people without even needing to know their names.

Things are getting SO exciting! It's been a long time since I first got into Death Note, and I don't have the best memory, so this reread is almost as thrilling for me as it was when I first got into this series. This manga series is not to be missed….