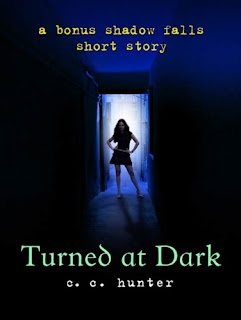 Independent and strong-willed Della Tsang hadn’t believed in ghosts until she saw her dead cousin darting into the shadows of an alley. She hadn’t believed in vampires until in the dark of that same night she is turned into one. Introduced to a strange world of supernaturals, she struggles to accept this new reality. Unfortunately, the boy she loves senses something different about her and can’t accept her. Should she follow her vampire cousin’s lead–walk away from everything she’s knows and loves—and fake her own death? Or should she set her pride aside and ask for help from the camp leader of Shadow Falls—a camp where supernaturals go to learn how to cope with their powers. Either way, her life as she knows it, will never be the same.

This is a prequel short story to the Shadow Falls novel series, starring Della Tsang, who is the roommate of the title character in the series, Kylie Galen. This is the story of how this friend was changed from a normal half-Chinese-half-Caucasian teenager into a vampire. As far as these prequels go, I thought it was pretty good. It's a decent length, and most of my Kindle file was the actual short story, not the preview for Born at Midnight.

I haven't read Born at Midnight, so reading this free prequel was meant for me to see if I liked it enough to give it a try. The characters were interesting, although I wonder how much they appear in the first novel. Della is probably in it enough, but what about her cousin, Chan? He was the other important character in this story, but I get the feeling he doesn't appear much in the novel. I have no idea what to think of Kylie because she's not even a blip on Della's radar screen at this point.

At any rate, based on this story, I can at least say that I think the first book might be worth borrowing from the library and giving it an good read-through.