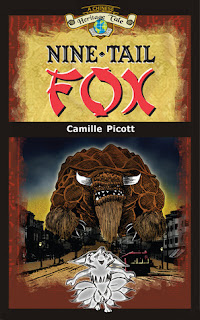 When fifth-grade Emma Chan-McDougal is ridiculed by her classmates for being part Chinese, she's devastated. To ease Emma's wounded self-esteem, her aunt, a Chinese immigrant, spins the mythical tale of a brave little Nine-Tail Fox named Ainu who lives in San Francisco.

In a parallel animal world that comes to life when humans slumber, Ainu Nine-Tail and her mother face off against Chih Yu, an ancient demon who feeds on hatred. As the last of their clan, the Nine-Tails are honor-bound by a family oath to defend the Chinese animals from the demon. When Chih Yu kills her mother and leads an angry mob against Chinatown, Ainu is left to complete the task alone. Raw with grief and only partially trained for battle, Ainu must reach deep inside herself to find the wisdom and courage to save her people.

Will the journey of Ainu Nine-Tail help Emma find the strength to confront the school bullies and win back her confidence?
My Review


Oh, wow—another awesome Chinese heritage tale by Camille Picott! I like this one even better than Raggedy Chan. It has all the excitement and thrill of a big-budget classic Disney animated film with cute Chinese fantasy animals as its main characters.

This story is all about teaching kids how to deal with racially motivated bullying, as it draws from the annals of San Francisco's history of Chinese discrimination. I don't know anything about it, but apparently, back in the 19th century, Americans wanted the Chinese immigrants to leave because they were taking away jobs, food, and commodities from San Franciscans.

In a gorgeous and wonderfully creative allegory using white nine-tail foxes and black, horned leopard-like creatures, Picott tells the story of how a young female fox named Ainu manages to defeat the evil and deceitful Chih-Yu, a spirit-world monster that feeds on and grows stronger from the hatred of the corporeal world's inhabitants. His purpose is to destroy all the descendents of General Nine-Tail, which Ainu Nine-Tail happens to be.

In the story, this allegory is being told to ten-year-old Emma Chan-McDougal, who is half-Chinese-half-American, by her Auntie Gracie, a Chinese immigrant living in San Francisco. In her own loving and tolerant way, Auntie tells Emma not to get discouraged by the bully at her school who calls her a squint because she has the physical features of a Chinese. That “friend” has only been tricked by Chih-Yu, who makes Americans hate Chinese people, and in the tale, she relates exactly how Ainu defeated Chih-Yu so Emma can do it, too.

Needless to say, it does the job wonderfully for the young girl. I really enjoy this story, as it flings you right into the action and devastation of the first Act, which left me in early tears. Then, more tears as Ainu leads the way for her fellow Chinese animals, and helps to ensure that Chih-Yu will never regain the power of hatred ever again.

I think anyone who loves epic tales of heroism, much like what you see when you watch a classic Disney cartoon, will adore this novella. Although this is completely different from Mulan, Ainu displays a very similar sort of courage and bravery to Mulan's, which will leave you feeling proud and satisfied in the end. It's a fabulous read for any child, whether bullied or not, Chinese or not. In fact, people of all ages would enjoy this and should read it.

* I received this complementary copy from the author in exchange for an honest review.