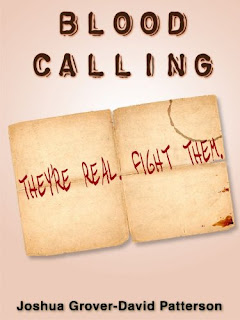 Now Lucy must stop the oldest, most dangerous vampire in history, before it can kill her family.
My Review

I hate to have to do it, but sometimes I must. This novel just warrants a negative review because it's riddled with what I perceive to be a lot of problems. If anything, it wasn't for me.

Now, this first issue isn't necessarily a problem, but that depends on the reader's preferred narrative style. This is a fictional autobiographical novel, so it reads like someone telling you their life story way back when it happened. Don't expect to be transported through time and space, feeling as though you're right there with the characters like a fly on the wall. I'm not against this style, but if every book were written this way, I know I'd get annoyed, eventually.

Story and characterization difficulties abound. There's no semblance of a plot. The characters just do one thing, then move on the next thing, kind of like real life. That can work in some fiction, like Interview with the Vampire, to name another vampire novel. But, not here. At least Louis regales an actual character in the novel with his life history. Here, we get Lucy rambling for 65,000 words to whatever reader will listen to her. And, of course, there's no depth of character, no inspired thematic elements to rescue it.

There are misplaced digressions that just don't seem to matter. The story of how Emma became a vampire is good, I'll admit. But, other than it being how she met the villain character, a bad old vampire, I didn't see any point to it. Then there's Wash's story of how he met the bad old vampire, told by Emma right before Lucy needed to go fight the guy in a one-on-one battle. Lucy even asks Emma to give her some fighting pointers before she goes to fight him, but Emma claims there's no time for that. But, there's time for a pointless story on how Wash met the bad old vampire? It makes no sense.

I also have a problem with every character sounding exactly the same. Many times they go on and on about something, for several paragraphs, which is not good, sounding exactly like the main character narrator. And, we get way too many details of every mundane thing Lucy does. She steps into the bathroom and she brushes her teeth, and then she gets into the shower, and she lathers up the shampoo—then, later she checks her phone for messages, etc., etc. This is commonplace, and doesn't add anything meaningful to the story.

I will never advise against buying a book because if you want to read something, despite my opinion of it, then you should. It's your life. Some people might find this story charming. I can see that. None of the characters are annoying, and at least Lucy's not some selfish, spoiled brat who sits around and lets everyone do everything for her. The story is not completely awful, but not particularly good. And, that's all I really can say about that.

* I received this from the author in exchange for my honest opinion.