Review: The Pledge by Kimberly Derting 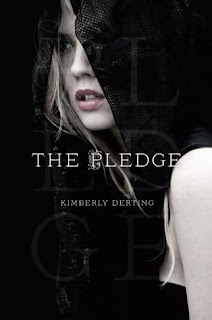 The Pledge (The Pledge, #1)
by Kimberly Derting

Genre: Dystopia/Fantasy
Reading Grade: Young Adult
Publication Date: November 15, 2011
Source: Simon & Schuster Galley Grab
Age Rating: 14+
| Amazon |
In the violent country of Ludania, the classes are strictly divided by the language they speak. The smallest transgression, like looking a member of a higher class in the eye while they are speaking their native tongue, results in immediate execution. Seventeen-year-old Charlaina has always been able to understand the languages of all classes, and she's spent her life trying to hide her secret. The only place she can really be free is the drug-fueled underground clubs where people go to shake off the oppressive rules of the world they live in. It's there that she meets a beautiful and mysterious boy named Max who speaks a language she's never heard before . . . and her secret is almost exposed.

Charlie is intensely attracted to Max, even though she can't be sure where his real loyalties lie. As the emergency drills give way to real crisis and the violence escalates, it becomes clear that Charlie is the key to something much bigger: her country's only chance for freedom from the terrible power of a deadly regime.
My Review

This one started out really slow for me, but once I got halfway through it, it got interesting. I wouldn't say this novel is amazing, but it's not awful, either. It's just pretty decent. I think my biggest problem was that I never came to identify with or love the characters that much. They were fine, but sort of there in the story, not really doing and saying things to make me feel more for them than I would for other random good people.

The Pledge has an intriguing premise, though. In a future of what was once the U.S., located in what was once New York City, I think (it's too vague for me), there lives a powerful queen who rules over her subjects, and forces them to all speak a classification of languages. Depending on the class of the citizen, they are required to speak only certain languages, and are forbidden from knowing others. Even understanding a language you aren't supposed to could mean death, but why this is the case never becomes clear.

In fact, it seems like this law is in place solely because the main character Charlie has the gift of deciphering languages without needing to be taught them. If there were a justification for why people in her Vendor class can't speak anything other than Englaise and Parshon, then it would be more believable. But, this law seems to exist for no other reason than to allow Charlie to hide her ability so she never gets discovered for who she truly is.

In the first half, there is a lot of romance, but the type that I find silly, as it seems like Charlie enjoys playing games with Max. She likes him, but she always walks away from him and tells him to leave her alone, etc.—her actions always betraying her true desires. But why? Other than being a teenager (and that's not a good excuse) I can't figure out why she has such a problem with Max in the beginning. Fortunately, that problem dissipates, and they seem to have a more honest relationship with each other, later on.

I like Xander, but he never comes to fruition as a character. The evil queen is actually very interesting, too, as is her mysterious identity. Who is this entity? What is she? None of it ever gets answered. I am fascinated by the fact that this entity continues to live on and on by taking over one female host body at a time, but why it always has to be an heir to a certain family line (and always female) is never explained. I like how she has trouble with her own grandsons who find her a disgusting creature, because that's what she is. She's only their grandmother genetically, and nothing more.

The novel has a good mixture of dystopia and fantasy, although not science fiction. People who want to read a story that mostly revolves around teen romance will probably like this, as it does that a lot, but it switches gears a bit in the second half to the political matters of the country. Silly teen romance fluff is annoying to an old bird like me. I like the intriguing political matters better.

*I received this as a complementary e-copy from Simon & Schuster for review.