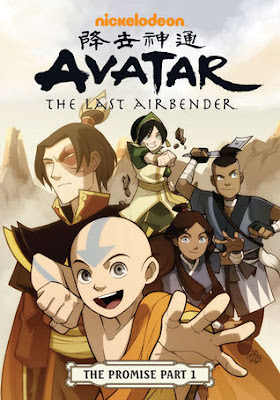 The wait is over! Ever since the conclusion of Avatar: The Last Airbender, its millions of fans have been hungry for more—and it's finally here!

This series of digests rejoins Aang and friends for exciting new adventures, beginning with a faceoff against the Fire Nation that threatens to throw the world into another war, testing all of Aang's powers and ingenuity!

I have been a huge fan of the Avatar: The Last Airbender Nickelodeon cartoon series for a number of years now, so when it ended with so many of my questions still unanswered, I was miffed to say the least. Not to mention I just didn't want all the exciting adventure to end. This new comic book series, though late in getting out into the world, picks up where the TV series left off, after Aang has defeated the evil Fire Lord Ozai, and has restored peace and balance to the world. Well, he sort of has…

But, Zuko finds some of the Fire Nation colonists are resistant to this displacement. The Fire Nation people of this colony have been living there for over one hundred years, and feel that Fire Lord Zuko is a traitor to them for making them leave their prosperous home. Someone makes an attempt on his life, and he winds up spending some time there with the colonists and realizes he has to go back on his word to support the Earth King in removing the people. This makes all his trusted friends, Aang, Katara, and Sokka believe he's becoming like his father, who is still in a Fire Nation prison.

Mostly what fuels the plot is a big misunderstanding between Zuko and Aang, and this time Zuko is in the right. Aang doesn't even realize just how hard this displacement will be on the citizens of the colonies, so they try to talk things out, as world leaders ought to. They are only able to get the Earth Kingdom protestors who want the colonists to leave to stop protesting, but that's about it. It ends with Zuko doing something quite shocking in regards to his imprisoned father, evidence that Zuko is continually haunted by him and his wicked legacy.

Zuko is the ultimate bad boy trying to change, but is constantly backsliding again and again. Despite the fact that he fought on the side of the Avatar during the war, and helped to defeat his sister, Azula, along with his father, he still has a lot of darkness within him. He's still a teenager who has a lot to learn about running an entire country. So, too, does the Avatar gang have a lot to learn about maintaining the world in a peaceful, balanced way. They are learning it's not as easy as it seems. Heck, even grown-ups can't get it right!

This new installment to the canon story felt like watching an episode of the cartoon series, in how it looked and felt on the story, dialogue, and characterization levels. The creators of the series are part of creating this comic book, so it ought to feel that way. The artwork is spectacular, as all the characters look just as they do in the cartoon. And, it leaves you with quite the shocking cliffhanger at the end! Somehow, this series is supposed to link up to the new Avatar Korra cartoon that will debut on Nickelodeon later this year, but exactly how is still not clear. I can't wait to read the next installment.

Buy this title from |Amazon|