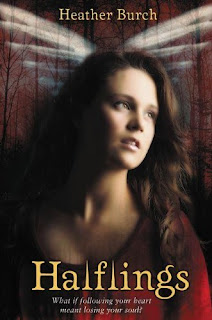 After being inexplicably targeted by an evil intent on harming her at any cost, seventeen-year-old Nikki finds herself under the watchful guardianship of three mysterious young men who call themselves Halflings. Sworn to defend her, misfits Mace, Raven, and Vine battle to keep Nikki safe while hiding their deepest secret—and the wings that come with it. A growing attraction between Nikki and two of her protectors presents a whole other danger. While she risks a broken heart, Mace and Raven could lose everything, including their souls. As the mysteries behind the boys' powers, as well as her role in a scientist's dark plan, unfold, Nikki is faced with choices that will affect the future of an entire race of heavenly beings, as well as the precarious equilibrium of the earthly world.
My Review

Halflings is an interesting take on angels and fallen angels, although I admit I haven't read much literature dealing with this subject matter. But, I did feel that a few of the characters held my interest. Nikki is at least not a typical teenage protagonist of the YA paranormal genre. She rides motorcycles and knows karate, but still lives a fairly normal life in Missouri.

She meets three teenage boys called Halflings, which means they are half human and half fallen angel. The attractive boys, Mace, Raven and Vine, go around and pretend to be brothers, but they were all born to different Halfling parents and had to be raised away from them for their own protection. A Guardian Angel named Will, a fully fledged angel, is their caretaker. Together, they spend their lives helping out humans in need and discover pieces of their missions through Will, who seems to be able to receive divine revelation.

Nikki and Mace are instantly drawn to each other, and experience “insta-love,” which I frown upon, but it doesn't necessarily ruin the story. Although, Nikki also finds herself intrigued by Raven, who is partial to his fallen angel side, as he has a delicious bad-boy streak. I was really interested in him at first, all snarky and wanting only human minions, but he cooled off toward the end as he became more interested in Nikki. Ah, so close. Almost had a really sexy anti-hero—nearly anti-villain. Still, he's a great character.

What's so shocking is that, low and behold, a true villain materializes in a character that really doesn't appear in the story much, in the form of an attractive older man that Nikki is constantly being thrust at. He has a weird connection to her parents, and even they are quite the mystery in and of themselves. I really found this villain character intriguing, but the story suddenly ends before I can discover what his deal is, and why he is so interested in having Nikki all to himself. Why is he so rich, and what connection does he have to the plot to destroy the world?

At the very end, Nikki suddenly feels wrong about being with him before he gets his clutches on her, so she runs back to the Halflings, and then it's all over. Most abrupt ending ever. I'd be far happier if the reason WHY this guy is so dangerous had been revealed, so that her running to the Halflings would make sense to me. Sure, the Halflings are like her guardian angels, but I really want to know why this mysterious guy she barely knows is so dangerous. Hopefully, it will get explained in the next book.