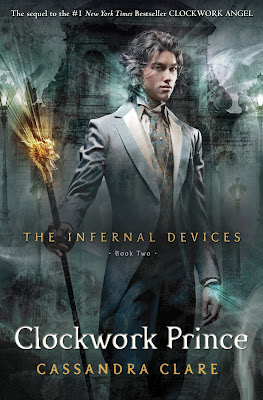 In the magical underworld of Victorian London, Tessa Gray has at last found safety with the Shadowhunters. But that safety proves fleeting when rogue forces in the Clave plot to see her protector, Charlotte, replaced as head of the Institute. If Charlotte loses her position, Tessa will be out on the street and easy prey for the mysterious Magister, who wants to use Tessa's powers for his own dark ends.

With the help of the handsome, self-destructive Will and the fiercely devoted Jem, Tessa discovers that the Magister's war on the Shadowhunters is deeply personal. He blames them for a long-ago tragedy that shattered his life. To unravel the secrets of the past, the trio journeys from mist-shrouded Yorkshire to a manor house that holds untold horrors, from the slums of London to an enchanted ballroom where Tessa discovers that the truth of her parentage is more sinister than she had imagined. When they encounter a clockwork demon bearing a warning for Will, they realize that the Magister himself knows their every move and that one of their own has betrayed them.

Tessa finds her heart drawn more and more to Jem, though her longing for Will, despite his dark moods, continues to unsettle her. But something is changing in Will; the wall he has built around himself is crumbling. Could finding the Magister free Will from his secrets and give Tessa the answers about who she is and what she was born to do?
My Review

Wow... This book is amazing. I was so pulled into this installment of The Infernal Devices series, that all the characters became completely real to me. This doesn't happen that often, but it does when a story is so well-told that I forget I'm just reading a book of total fiction.

The first book (Clockwork Angel) is wonderful and I highly suggest everyone read it who hasn't already [see my review here], but this one (Clockwork Prince) is immaculate. Although, I don't think a reader would think that quite as much if they weren't already invested in the characters prior to reading it. If you haven't already fallen for Tessa, Will and Jem (even Sophie & Magnus), then you might not like this one as much, since its primary focus is on these characters' relationships with each other.

Cassandra Clare is an author who knows how to tell a story the right way. In book 1, we get a very plot-rich story wherein we spend 500 pages learning about the characters and seeing them showing off their true colors as they react to different plot stimuli. The romance is saved for late in the book, and even then, it is still very light. If Clare had decided to ram the romance down our throats from the onset of the story, it would have given us all indigestion, because we need time to get to know who these people are first before we enjoy that kind of intimacy. Who wants to watch strangers making out in public? Anyone? Not me. So, you need to learn to care about the people of that world first, then becoming a romance voyeur is not only acceptable, but highly anticipated.

In book 2, the plot is now able to take a bit of a backseat to the overall narrative (but, not completely), and we can focus on our lovable characters. We can get into all the drama of romance, broken hearts, disappointment, the mania of love and desire, etc., because we love these characters already and we want to see what happens—we want to see what they will do and say to each other. With perfect timing, Clockwork Prince definitely satisfies in that regard.

I personally adored this (that's not even the right word. It's more than that!) because it gave me everything I wanted. Any Jem fan, like me, will be able to dig their own grave and lie down in it, because they can now die happy. Go out on a high note! But, it is not without a semblance of sadness, too, because Tessa experiences her own complications with her brother (and, my heart goes out to her so much over that problem), and Will has a sort of epiphany of his wasted potential, which is tragic in its own right. Like any truly great book, there is a good mixture of happiness and sadness.

I'll just ask now, can I have Jem? He's one of those characters you want to be real so badly, you almost believe you can reach inside the book's pages and pull him out. Ah, if only... I have to add him to the list of fictional 19th century heroes that make me squee, if only because he is the ideal gentleman. In this volume, we really get to see his true colors, see that he is a human being, flawed in his own beautiful way (different from Will's way), and prone to being overwhelmed by emotion and feeling. You get to see just how fragile his heart is, and how precious he is to his dearest friends.

If you've been harboring doubts about this series, you really shouldn't. I can't imagine anyone being disappointed by it. The world-building is thorough, the characters fully developed, their relationships with each other raw and real, and plenty of interesting things happen all the time. What more do you need? It's nearly perfect.

My score: 5 out of 5 stars. (Totally mesmerizing and amazing...)

P.S. There will be a manga graphic novel adaptation out later this year, starting with book 1, and I'm going to pee myself with joy! You can even pee yourself now if you want to read a new chapter every month over at YenPress.com/YenPlus where the story is already being serialized for $2.99 USD (monthly). Those boys are prett-ay!
Posted by Cathy Keaton on Saturday, February 04, 2012