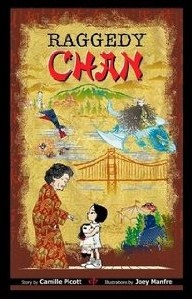 Emma Chan-McDougal receives a special gift from her Auntie Gracie: a rag doll named Raggedy Chan. But Raggedy Chan is no ordinary doll. She is a beautiful Chinese princess who lives in a jasper palace on the enchanted isle of Kunlun. The peace of her island home is threatened when Drought Fury steals Winged Dragon, bringer of rain. Without Winged Dragon, Kunlun will wither and die.

To save her stricken homeland, Raggedy Chan sets forth alone. Her quest leads her to America, where she meets people who distrust her because she’s different. Can Raggedy Chan adapt to the strange ways of this new land and rescue her beloved dragon?

In this 10,000-word modern fairy tale, Chinese-American author Camille Picott draws on her heritage to weave a story of magic, adventure, and sacrifice.

I didn't know what to expect from this very short story. I was able to get it for free (from Smashwords.com), so I decided to take a chance on it, and it turned out to be a really wonderful read.

The story begins with a little half-American/half-Chinese girl named Emma who is being babysat by her Chinese immigrant aunt Gracie. Gracie gives her a rag doll named “Raggedy Chan” and proceeds to tell her the fairy tale behind the doll. It weaves back and forth between the story and the scenes of Emma being sat by her aunt.

The story-within-the-story is about a princess named Yao-chi who lives on an enchanted island in China, and decides to go after a mythical rain dragon that has been stolen by an evil sorceress. If she doesn't bring it back, her land will dry up, and everything and everyone will die. She travels to San Francisco through the Pacific Ocean and has to enter a large golden gate. But, before she can enter, she has to give up her real name. Think of Ariel from “The Little Mermaid” Disney movie when she has to give up her voice to Ursula. It's a physical removal from her body, and it's the same thing for Yao-chi. She pulls her name out of her mouth and it's in the form of a small ball.

She is given the name Raggedy Chan, since everyone's names are “Raggedy” something-or-other. It's so interesting how she has to physically transform into what the Americans look like, and they all look like rag dolls: yarn for hair, button eyes, silk/cloth skin. She deals with discrimination while in the U.S., and, later, the difficulty of returning to her homeland after changing so drastically in order to fit in with the Americans. She ends up no longer feeling like a Chinese person any longer.

It's very telling for those who have had to leave behind their home countries for a new world and shuffle off their original skin for the new skin of their foreign home. I don't have any personal experience with this, but I can only imagine how hard this is for people moving from one culture to an extremely different culture. It must make one change forever, unable to be exactly the same person ever again.

This is a great story for kids and adults alike, as it not dumbed down in anyway. Nor is it written in a complex way, but it has an incredible depth to it that more analytical readers will love to plunge into, especially those interested in fictional analogies of discrimination.