Review: Things to Do in Denver When You're Un-Dead by Mark E. Stone 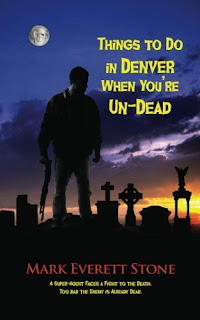 For ten years Kal Hakala has been the Bureau of Supernatural Investigation's top man, the longest surviving agent in its blood-soaked history. There has been no case he couldn't crack, no monster he couldn't kill. Until a plague of zombies in Denver turns into an investigation of a vicious serial killer dubbed The Organ Donor. Fueled by rage and a hatred of all things supernatural, he dives headlong into the one mystery that could finally kill him.

I received this title as an Advanced Reader Copy from the publisher, as requested by them, in exchange for a review.

I'll admit, I thought this was going to be a comedy, based on the title alone, but it really doesn't have as much humor in it as I expected. It does have some humor, but it's not what I would consider a “comedy”. It's a bit serious, but not overly so.

I really liked how this story explains why certain inspirational and genius people in history were able to do the amazing things they did. It was because they used magic from the World Under, which is a separate realm from our known world where supernatural beings are from. When the magic is not being misused (but it mostly is and that's why Kal has a great-paying job killing rogue supernaturals), it is being used by famous historical people to effectuate much needed change, develop technology, etc. Or, it's being used by Kal's magician sidekick, Alex, who is smarter than a sack of Einsteins.

Alex, wearing his trademark “birth control” nerd glasses, ended up being my favorite character along with his buddy Ghost, who is a creepy cyberspace-dwelling ghoul that can hack into literally ANYTHING encrypted like melted butter. He's the guy you want on your side. Ghost's origin story is very fascinating, but I only wish it hadn't been saved for the very very end.

Alas, I did feel this novel was riddled with too many cliches that bogged it down. Sure, Dirty Harry spouted off cliches in his movies, but they only became cliches after his movies became big hits. Kal could have started his own original sayings, but every other sentence was something I've heard uttered a million times before. This kind of made me not like him as much as I probably could have. But, he was fairly well-developed and the reader finds out what motivates him from oodles of back-story.

Speaking of back-story, the other sort of off-putting issue was with the constant flashback chapters. Some are fine if they are appropriately placed within the plot. But, I found not only were they scattered throughout, even placed at the very end of the novel, they were often not particularly illuminating. It seemed like a few were completely unnecessary, or just didn't give me the info on the characters I was expecting they would deliver.

But, back to what I liked for a moment to wrap up my review: the end. The ending was very good and completely unexpected. In the last chapter I never expected what was coming and double that for the surprise happening in the epilogue. It was very fitting and satisfying, although the story preceding it needed to be edited better. Still, this story was decently written. Fans of urban fantasy starring characters like Kal Hakala might enjoy this title.