This week's question is:

Let's step away from "besties"... What is the worst book you've ever read and finished?

The worst book I ever read and finished would have to be Moll Flanders by Daniel Dafoe. Moll Flanders is the name of the protagonist, the character the story is all about, and she is just the most selfish annoying character ever created! Well, she's one of the worst I've read about, anyway. I had to read the novel in a college course on 18th century British novels and it is one of the oldest ones. No paragraph breaks, no chapter breaks, no quotation marks around dialogue, no dialogue tags. It was a real mess since the above innovations hadn't been discovered by the British just yet.

Since she was a prostitute, perhaps that was how she could justifiably be so selfish and stupid, but I still like my protags to be less irritating. 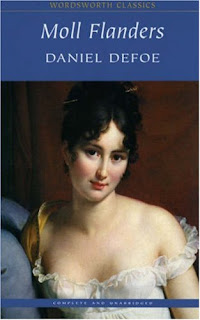