Here are a few e-books I got recently that I can't wait to dig into! Hopefully, I'll be able to post reviews for them one day, but if not, you know I've got 'em... 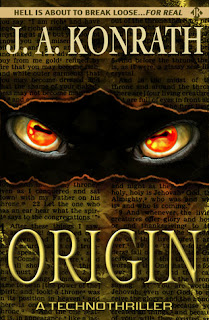 
All hell is about the break loose. For real.
In reality, Satan is not a handsome gentleman as portrayed by a Hollywood leading man. Viewing him through the Plexiglas, he's a frightening beast, massively muscled, with hoofs the size of washtubs and the serrated teeth of a carnivore. The demon can be pleasant, even chatty, and delights in showing off his power of resurrecting the dead sheep he dines upon. To some of the staff studying him at the secret government compound, he's even likable.
That is, until he escapes...
Konrath is a big name in the self-publishing industry and I sampled a bit of this book from the beginning, and it seemed very well-written & engaging right-off-the-bat. I just hope it doesn't scare me too much!

Out of Time: A Paranormal Romance
by Monique Martin
Amazon.com


New York in the 1920's is the world of Prohibition, speakeasies and an underground run by the underworld. Vampires and mobsters vie for power in the seedy underbelly of Manhattan.
A mysterious accident sends Professor Simon Cross and his assistant, Elizabeth West back in time to face demons real and imagined.
Simon Cross has spent his life searching for vampires and now that he’s found one, it just might take from him the only woman he’s ever loved. Simon’s life has been a ritual of research into the occult and stoic solitude. He prefers it that way. Until he meets Elizabeth West.
A gambler’s daughter, Elizabeth knows a bluff when she sees one. Behind Simon’s icy glares and nearly impenetrable armor beats the heart of a man in desperate need of love.
Trials of murder, intrigue and danger push Simon and Elizabeth to the edge of sanity.
This is another indie author read that sounded interesting to me since I love historicals and mad scientists. Well, even if the main male character isn't "mad", he's still a scientist.

Laurel was mesmerized, staring at the pale things with wide eyes. They were terrifyingly beautiful—too beautiful for words. Laurel turned to the mirror again, her eyes on the hovering petals that floated beside her head. They looked almost like wings.


In this extraordinary tale of magic and intrigue, romance and danger, everything you thought you knew about faeries will be changed forever.
I got this e-book for free on my Kindle when it was first released back in May of this year (kind of recently!) during its early Kindle e-book promotion. It seems like everybody likes this title and it looks to be a good read. After all, the first book in the series was free, so naturally I'd try out this paranormal romance...
Posted by Cathy Keaton on Monday, June 27, 2011