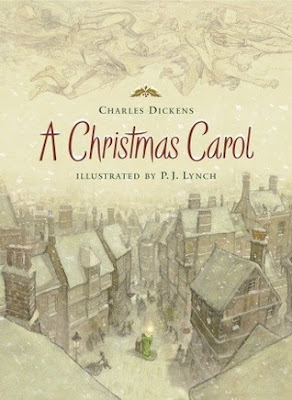 A Christmas Carol
by Charles Dickens

Ebenezer Scrooge is a heartless old miser who hates everything, especially Christmas. Then one mysterious Christmas Eve, Scrooge is visited by three spirits who take him on a fantastic journey and teach him the true meaning of the season.

Here's a review of an old classic that I bet a lot of people these days don't actually sit down and read much anymore, like I do sometimes. Which is a shame because reading the actual novella of this well-dramatized tale is so much more insightful and fun than getting it from some modern adaptation. Reading from The Master himself, Charles Dickens, is like being transported back in time to when he lived and breathed and celebrated Christmas the way people did back then.

People threw parties and invited over their family and friends and played 'blindman's bluff' and 'yes and no,' and drank spiked punch, knowing it was spiked, and ran around in the snowy streets of London buying the fattest Christmas geese they could get from the nearby street vendors. It sounds like it was all so festive and lively. And, Dickens is the best at describing things in a way that makes it feel real, which is like having a freakin' time machine! I'd give anything to go back in time to his day, and thankfully, we sort of get to because of his writing legacy.

Probably one of the best preserved records of how people lived during Queen Victoria's reign of Great Britain are contained in anything Dickens wrote, but what makes this one so special is how it captures their Christmas, and how the way we modern people celebrate it today was only just starting to take shape back then. In fact, they began the tradition of sending each other Christmas cards that same year, in 1843, when this story was published. And, in 1841, Prince Albert popularized the Christmas Tree, bringing that tradition to all the English-speaking world from Germany.

And, to think that Christmas and how we celebrate it is really not so different than it was back then kind of touches my heart. If only I could tell Mr. Dickens that his ghostly little story—which he liked to call it—is still so popular to this day. That we can't even separate it from Christmas at all! We still cry when we think of Tiny Tim and what Scrooge did to prevent his untimely death—becoming one of literature's greatest villains-turned-heroes. Hopefully, our modern society will continue to keep A Christmas Carol in our hearts for several more generations yet to come….