ZOMG, the League of Disney Princesses can't believe it! And, neither can I.

Evidently, five hundred (500) new fairy tales previously unknown to the world have recently been uncovered in Germany. (read the article from The Guardian) They have been locked away in an archive in Regensberg, Germany for over 150 years. The stories are made up of myths and legends, or just fiction gathered by a local historian of the era named Franz Xaver von Schonwerth (1810-1886) at around the same time the famous Grimm Brothers were collecting their fairy tales. 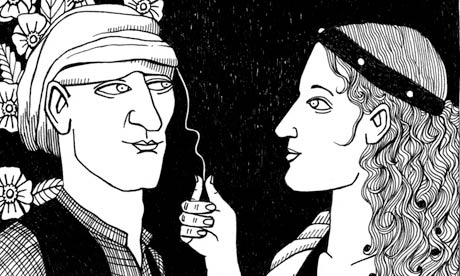 This image above depicts one of the newly discovered fairy tales titled, King Golden Hair (illustration by Barbara Stefan). Not all of those discovered were new to us modern day folks--Cinderella and Rumpelstiltskin were accounted for as they've been told in many different versions across Europe. It is believed that these stories were not actually all meant for children, but rather for young adults just getting started on their lives.

"Their main purpose was to help young adults on their path to adulthood, showing them that dangers and challenges can be overcome through virtue, prudence and courage," says Erika Eichenseer, the cultural curator at Oberpfalz, which is the region where the new fairy tales were discovered.

I don't know about you guys, but I want to read these new stories! Disney is back in business again....
Posted by Cathy Keaton on Monday, March 12, 2012